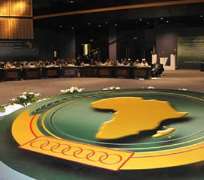 The African Union said on Thursday it had lifted its suspension of Libya's membership.

The AU said in a statement it had decided to "authorise the current authorities in Libya to occupy the seat of Libya in the AU and its organs".

The AU meeting was held before news that Muammar Gaddafi had been killed and his last bastion, the city of Sirte, had fallen to National Transitional Council fighters.

The AU said it would set up a liaison office in Tripoli to be headed by a Special Representative.

The AU was slow to recognise Libya's National Transitional Council as the north African country's de facto government. Gaddafi had been one of the bloc's main financiers and had presented several African leaders with large sums of money.