PRESIDENTIAL RETREAT WITH THE PRIVATE SECTOR 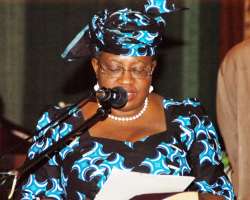 COORDINATING MINISTER FOR THE ECONOMY AND MINISTER OF FINANCE, DR MRS NGOZI OKONJO-IWEALA.
Listen to article

PURPOSE & OBJECTIVES:
A Two-Day Presidential Retreat with the Private Sector was held on the 13th and 14th of October, 2011, at the Banquet Hall of the Presidential Villa, Abuja. The theme of the Retreat was ‘Economic Development and Job Creation’. The Retreat’s purpose was to ensure that the Government and Private Sector work collaboratively to deliver on the Transformation Agenda.

As indicated by the Coordinating Minister for the Economy/Minister of Finance, Dr. Ngozi Okonjo-Iweala, the expected outcomes of the Retreat were to:

• Identify and prioritize the resolution of critical challenges facing key sectors of the Nigerian economy;

• Identify special areas of focus and strategies to create jobs;

• Propose specific recommendations on how to unleash the potential of each of the identified critical sectors;

• Identify key indicators to focus on to improve Nigeria’s competitiveness; and

To achieve these ends, the Retreat brought together key government functionaries of President Goodluck Jonathan’s Administration, and leaders of industry to brainstorm and strategise on how to realise Nigeria’s vast but latent capabilities as a nation, and transform this potential into a tangible reality, where Nigeria rises to take its place as the economic and political Giant of Africa.

The Administration’s delegation to the Retreat was personally led by His Excellency, President Goodluck Jonathan, and included the Vice President, the Secretary to the Government of the Federation, Ministers of the Federal Executive Council, Members of the Economic Management Team, and Heads of Parastatals and Agencies.

The Retreat was also attended by the Distinguished Senate President and Honorable Speaker of the House of Representatives, on behalf of the National Assembly; as well as the Executive Governors of Adamawa, Anambra and Cross River States, representing the other tiers of Government.

The Private Sector was represented by chief executives, board chairmen, investors, entrepreneurs and other leaders drawn from the manufacturing, agriculture, oil and gas, construction, telecommunications, entertainment and other key sectors of the economy. Professor Paul Collier, an international expert on natural resources management and economic development, also shared some profound insights with participants at the Retreat.

Resource persons drawn from the Public and Private Sectors, as well as the Academia, spoke on:

• Medium to Long-term Strategic Perspectives on Nigeria’s Vision and the Transformation Agenda;

• National Competitiveness and Development: the Role of Information and Communications Technology.

KEY OUTCOMES:
After extensive and participative deliberations during the plenary and break-out sessions, the Retreat’s participants agreed on the imperative of moving beyond discussing the challenges to economic growth and job creation, to delivering key priority outcomes.

There was clear consensus around several key messages, including:

• The President’s charge for both the Public and Private Sectors to imbibe a positive and proactive attitude to delivering on the required reforms, as this attitude was as important as the reforms themselves. This transformative attitude was best represented by the twin mantras of ‘Just Do It’ (that is, moving from deliberation and consensus-building to execution and delivery), and ‘Never Again’ (that is, that previous mistakes of economic mismanagement and missing past opportunities to realize Nigeria’s potential should not be repeated).

• The Administration’s commitment to support the Private Sector as it reverts to its traditional role of driving economic growth and development, in line with the Transformation Agenda. This commitment was to be rapidly expressed in tangible reforms to improve the business environment for Nigerian and foreign investors, and provide a level playing field. Specific policy measures were to be targeted at:

– Enhancing economic justice through the responsible stewardship of natural resources for present and future generations;

– Enhancing critical infrastructure by deliberately sequenced reforms, such as incrementally achieving reliable and adequate electricity supply; as aptly stated, ‘No Power, No Future’ in terms of economic growth and development;

– Accelerating the implementation of key reforms including the Power Reform Roadmap, Ports Reforms, the Agriculture Transformation Action Plan, Downstream Deregulation, Land Use Act reform, and the passage of the Petroleum Industry Bill into law;

– Active engagement through economic diplomacy with neighboring ECOWAS nations to address trade imbalances and concerns within the framework of the Common External Tariff.

• The Private Sector’s commitment to support the Administration’s Transformation Agenda and ongoing reforms. This commitment was immediately evidenced in the overwhelming support of Private Sector participants at the Retreat for both the establishment of the Sovereign Wealth Fund and the proposed Downstream Deregulation.

• Regularly engaging with segments of the Private Sector through such periodical Retreats to deepen this strategic partnership for success, as well as to agree on and implement concrete measures that will unleash the full potential of each sector.

The Economic Management Implementation Team is take the outputs and convert these into work-plans, action points and key performance indicators, with appropriate monitoring mechanisms to be established to measure the achievement of key deliverables.

Other policies, and their implementation modalities, were to be announced by the Government in due course.

Signed
Coordinating Minister for the Economy/Minister of Finance