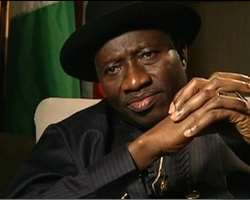 ABUJA, October 19, (THEWILL) - For the second time, the House of Representatives today withheld approval to President Goodluck Jonathan’s 2012-2015 Medium Term Fiscal Framework (MTFF) submitted to it. The House has subsequently referred the MTFF to its joint committees on finance, appropriation, national planning and economic development and legislative budget and research for further legislative study.

Section 11(2) of the Fiscal Responsibility Act, 2007 required the President to present a Medium-Term Fiscal Framework (MTFF) for the next three years to the National Assembly, pursuant to which the document was sent to the House a fortnight ago.


While leading debate on the document, leader of the House, Hon. Mulikat Akande-Adeola explained that the federal government had articulated its revenue and expenditure plans as well as its fiscal policy objectives for the next four years in the MTFF, and Fiscal Strategy Paper (FSP) in line with section 11(3) of the Fiscal Responsibility Act 2007.


“A review of the revenue and expenditure of the 2010 budget, and its deficit implication due to recurrent and capital over-budgeting, government plans to continue with its fiscal consolidation policy of 2011 in order to mitigate the dwindling oil revenue.


“The Executive also went ahead to state assumptions underlying the projections for both oil and non-oil revenue for the purpose of the MTFF and the revenue and expenditure profile of the government for the next four years. This will be based on a conservative benchmark price of oil between $65-$70 per barrel and any excess or windfall will be transferred at N150 per dollar to the Sovereign Wealth Fund (SWF) while tax collections on CIT, VAT and Custom duties are expected to be improved upon,” she said, urging members to consider it for approval.


First to kick against the MTFF was Hon. Bamidele Opeyemi (ACN, Ekiti) who accused the executive of selective compliance with the Fiscal Responsibility Act; specifically saying its failure to turn in a quarterly report to the joint committee on finance of the Senate and House of Representatives as required by section 30 of the Act was unpardonable.


He warned that the executive cannot choose which aspect of the law to comply with, adding that it was time its attention was drawn to the breaches.


In his contribution, deputy minority leader, Hon. Abdurahman Kawu (ANPP, Kano) said while the federal legislature kept its promises of cutting down its overheads, the executive arm had remained adamant to doing same, preferring that House seek further clarifications from the Federal Ministry of Finance on the current state of the running costs for Ministries, Departments and Agencies (MDAs).


Also opposing the document, deputy chairman of the House committee on diaspora, Hon. Betty Apiafi (PDP, Rivers) expressed reservations about the document saying last year, only N1.2 trillion was budgeted for capital projects and that just about N900 billion worth was implemented.

According to her the MTFF has not stated where funds will be sourced for specific projects.

“Obviously, that is why Capital budgets are not funded.”

She said the MTFF lists projects in Communication, Power, Education, Construction and others with no visible outcome.

“Every year, we budget for Power and other sectors. What is the outcome? What should be our expectation on this current projection? We spread ourselves thin by budgeting for too many things and we don’t achieve much,” she added.


Apiafi said it would have been better if the priority projects in MDAs are listed and funds provided specifically for them so that project would not always be abandoned half way.

“If this is done, there will be no need for virements for the Executive to play with,” she said.

She noted that the removal of subsidy on petroleum products was not necessary considering that unremitted funds in MDAs could provide much needed funds for infrastructure.

“Last year over N200 billion was not remitted by MDAs. So, we should know how much MDAs are to remit in this current projections, how can MDAs be collecting their recurrent every year while they hold on to Internally Generated Revenue (IGR) and the government says it wants to remove fuel subsidy?”

The chairman House committee on appropriation, Hon. John Enoh said the MTFF states that the federal government is going to save N1.2 trillion from the removal of fuel subsidy.

“But the parameter does not show that the subsidy savings is imputed into the 2012 budget,” he said.


He added that the inconsistency in the document shows the federal government is not adhering to the dictates of the Fiscal Responsibility Act.

He also noted that the oil benchmark proposed by the government for 2011 was adopted for 2012 and that it was also premised on the 2.4 million barrels per day production estimates given by the Nigerian National Petroleum Corporation (NNPC).

Enoh stated that such parameters may be knocked out of sync by global trends and unforeseen circumstances.

“We need to look at it because of its implications,” he said.

He noted that in order to restore confidence in the budgetary process, budgets of statutory corporations and agencies of government must be submitted in line with the requirement of the Fiscal Responsibility Act 2007.