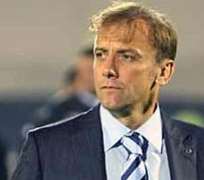 Black Stars of Ghana coach, Goran Stevanovic has told critics of his team selection not to destroy the perfect atmosphere in his camp.

The Serbian was criticised by a section of the Ghanaian press for not fielding players considered to be fans' favourite for his last game against Sudan and Nigeria.

Despite beating Sudan 2-0 to qualify for the Africa Cup of Nations with a perfect record, Stevanovic's critics sniped on. When a journalist quizzed the coach over the inclusion of John Mensah, Sulley Muntari and John Pantsil claiming they don't play much for their clubs, the coach said they are the best to help the country.

'I had my vision of the game against Sudan. I watched the Sudan team three or four times and I made my decision on who can help us to win the game,' Stevanovic said.

'After this great victory in Sudan we all need to be happy about this. The soft-spoken Black Stars coach angrily asked: 'Why do we need to talk about negative things - why?

'Does somebody want to destroy us and destroy the atmosphere, unity and spirit of the team?,' he asked.

'I am the coach I take the decision and I stand by my decisions.'