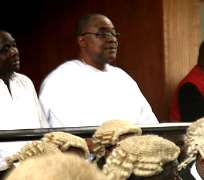 The trio are standing trial on an 11 count charge of conspiracy, illegal acquisition of property and illegal award of contracts preferred against them by the Economic and Financial Crimes Commission, EFCC.

Ruling on their bail application, Justice Moshood Abass observed that the offence for which the accused persons are standing trial attracts jail terms of between 3 and 7 years imprisonment on conviction. He said since it was not a capital offence, the accused persons were entitled to bail. The trial judge noted that the second and third accused had visited EFCC more than seven times between 2007 and 2010 and were even granted administrative bail by the anti-graft agency. He stated that if the EFCC could grant them bail, it should not be the responsibility of the court to deny them bail. Justice Abass further stated that there was no proof before the court that the defendants would jump bail.

On the first accused, Justice Abass said the report available to court indicate that he is hypertensive and should not be denied access to proper medical attention. He therefore admitted Alao-Akala to bail in the sum of N500 million and two sureties in like sum. The sureties must have landed property in the Ibadan GRA, and swear to an affidavit of means.

The second and third accused persons were admitted to bail in the sum of N300 million and two sureties in like sum. The sureties must have landed property in Ibadan GRA and swear to an affidavit of means.

The accused persons are however to remain in the custody of the State Security Service pending the perfection of their bail conditions.

When they were first arraigned on Tuesday October 11, the accused persons pleaded not guilty to all the charges but their bail application could not be heard following the argument by the prosecution counsel, Godwin Obla asking for time to study and respond to the application. This prompted Justice Moshood Abass to adjourn proceedings to Wednesday, October 12.

At the resumed hearing on Wednesday October 12, the court for more than five hours, heard arguments from counsel on whether it should or should not exercise its discretion by admitting the accused persons to bail.

Lead counsel to the defendants, Mamman Osuman, SAN urged the court to admit the accused persons, especially the first accused (Akala) to bail on the ground ill-health and tendered a medical report to back of his claim. He told t he court that Akala was already due for check up that that his health requires frequent monitoring. In addition, he reminded the court that the offence allegedly committed by the accused persons was bailable.

Similar arguments were advanced in support of the bail application of the second accused person, Senator Babalola. Counsel claimed that as a senator of the Federal Republic, the accused person was not likely to jump bail if granted.

The accused persons are alleged to have siphoned N11.5 billion from the Oyo State Government treasury through illegal award of contracts, obtaining by false pretence and acquiring property with money derived from illegal acts and concealing the ownership of such property.