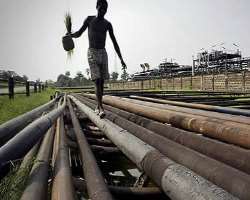 PORT HARCOURT, October 05, (THEWILL) – The Nigerian Navy has scored a major victory against oil thieves and bunkerers operating in oil rich Niger Delta with the seizure of three (3) vessels loaded with about 3.5 million litres of crude oil suspected to have been stolen.

Also, 43 persons suspected to be involved in the illegal trade are being detained by authorities in River State following several operations by a special Naval team.

The commander of the Forward Operations Base (FOB) of the Nigerian Navy, Navy Captain Tanko Yakubu Pani while briefing journalists during a chat in Bony, Rivers State, also revealed that six (6) illegal refineries in the creeks of Karibama Community, Bonny Local Government Area were destroyed by Naval agents.

"In compliance with the directive of the Chief of Naval Staff, Vice Admiral Ola Saheed Ibrahim, the sustained patrol by the FOB, Bonny in recent times to check economic crimes and other nefarious activities around Bonny waterways is yielding the desired results.

"The base has continued to ensure zero tolerance to illegal activities and their perpetrators, in spite of inadequate platforms and logistics.

"The illegal refining activities taking place within the creeks and environs are alarming. The illegal activities have led to pipeline vandalism, river and land pollution, environmental degradation, oil theft and loss of revenue to the Federal Government, ” Captain Navy Pani said.

Some of the vessels seized include MT Arcturus, a barge with stolen crude owned by Arcturus Merchant Trust Limited and a tog boat named MV Lady V.

Pani added that the police have been called in to prosecute those arrested.