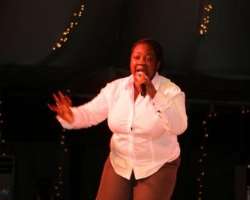 What a man can do, a woman can do better, goes a popular downtown Nigerian street lingo. This particularly used to be the case when gender-based issues were raised. Gradually, however, the slang began to be applied in virtually all professions, the entertainment sector inclusive.

Until recently, the Nigerian entertainment industry was dominated by the male folks essentially because of the society regarded the womenfolk as weaker sex. The seeming revolution, which saw female comedians getting involved in the entertainment industry, has drastically changed the trend. The revolution actually began with Mandy and Princess leading the pack. Ever since, more female folks have embraced comedy business that used to be an exclusive engagement of the men.

A Creative Arts graduate of University of Lagos, Princess earlier attended Our Lady of Apostles Secondary School, ljebu-Ode. She is said to have been involved in acting since her primary school days.

After secondary school, she registered with the Nigerian Actors Guild, but nothing serious came her way then. Later, she gained admission to Federal Polytechnic, Ilaro, to study Electrical and Electronics Engineering. She graduated and worked with a Construction Company in Ikoyi for a while before she joined another company at Ilupeju area of Lagos. She was with them before she gained admission to UNILAG to study Marine Engineering. She changed to study Civil Engineering in her second year and at the end of the session, she quit engineering for Creative Arts.

For her, acting is a natural calling. She started acting at the age of six. When little Damilola was nine years old, she took part in a play entitled: Half Human, Half Animal. The play was staged at Ijebu-Ode and that was her first major stage play. Princess kept on acting, but stopped because she had to combine it with work as an engineer.

In 2001, she met Kayode Peters and started participating in stage productions with Theatre 15 at the University of Lagos and the MUSON Centre. During this period, she took part in such plays as Armageddon, Black Sheep, Mama, Private Lies, among others. Though she loves comedy, she was on and off until 2004 when she met Wale Adenuga who saw in her a comic character. Prior to that time, she had played many comic roles in some of Kayode Peters' Productions.

Wale Adenuga was actually the first person that insisted she could do stand-up comedy. Some of the roles she played were funny. Later, she started doing stand-up comedy during intermission in stage plays.

In 2004, Tee A asked her to join him in his programme to do a segment and that was just how she came to limelight. Ever since then this comedian born with dreadlocks has been waxing stronger as a result of which her name has become synonymous with female comedy in the country.

She is still an actress and also trail blazer as a stand-up comedian.

Princess, as she is popularly known in showbiz circles, has featured in so many television programmes, including Flat Mates and Super Story. She is into many things.

She has a large heart as she keeps encouraging female colleagues to come into the field. "People call us to work together and there is no form of rancour in the business because we work together as a team," she told Daily Independent when asked if there is any form of unhealthy rivalry between male and female comedians.

Mandy claims to be the first female comedian in Nigeria, because she was the first woman to do stand-up comedy, and by that, she has literally become a mother hen to other upcoming female comedians in the country.

Undoubtedly, she is a force to reckon with in Nigerian comedy, as she is one of the female practitioners in this industry who have distinguished themselves with their jokes.

Mandy started out with the Charley Boy Show in 1992 and is still cracking ribs presently with no intention to retire in the nearest future. Her daring moves had seen her plucking many awards and with many events to her name.

Although she sees comedy as an in-born trait, which nobody can study in school, she encourages more ladies to come into the industry, stressing that there are lots of potentials in it.

When she started with Charley Boy on his TV programme, the Charley Boy Show, Mandy was then doing the candid camera segment of the show in the streets. Then, she was in her second year in the university. She never envisaged that what she was doing would eventually blossom to stand-up comedy. Upon graduating with a degree in Political Science, she came back working for Charley Boy and after a while she was invited to a Girls Night Out hosted by Ayo Animashaun.

As she claimed, she did not go out of her way to become a comedian rather comedy chose her. Then she was known as Mandy the comedian, Mandy the actress and Mandy the singer. At a point in time she felt she was doing a lot of things at the same time and so she chose comedy.

She has done a lot of shows and she is the brand face of Fayrous drink. She sees no form of rivalry in the industry though, according to her, people tend to trust men and so their male colleagues get more jobs. "We are all colleagues but people tend to trust men more than women but we (women) are more careful in handling things," she said. Mandy has a daughter (April).

Helen Paul crept into the entertainment industry without being noticed, but she is presently one of the celebrated female comedians in the country. She is currently in her final year studying Theatre Arts at the University of Lagos. Helen actually began with singing and acting in the church. She did her first professional comedy in 2005 at the University of Lagos. Her goal is to work in a team of skillful and proven professionals where new ideas and challenges are the main focus.

Though combining acting, academics and comedy, she is waxing strong in the entire gamut of the industry.

Zeroth. She has performed at Sleek's make-up anniversaries and Sleek's outlets opening ceremonies. She equally performed at one of former Governor Bola Tinubu's birthday parties. In 2008 she performed at Rhythm Unplugged. She worked on Indomie Noodles, Cowbell and bank PHB's advertorials and jingles.

Zeroth. She is presently featuring on Peak milk advertisements, jingles and radio programmes, Peak Moments. She has also featured on several music projects with groups like P-Square, Infinity, Olufunmi, Yinka Davies, among others.

Zeroth. She is currently working with radio and television stations (T.V. Continental).

She is another woman who paddles her stuff in the male dominated comedy terrain effectively. Many admire her unique way of throwing banters about her big size. She broke into limelight with a brilliant outing at the 2006 edition of Night Of A Thousand Laughs and has since performed in several other shows including Laugh and Rock, Accra, Ghana, an independence anniversary show put together by Opa Williams. She actually started comedy in 1995 when she was a student at University of Ibadan, as compere for a group called Lafomania Organisation.

"Then we had comic-drama sketches capturing everyday campus life. My job was to get the people excited by appearing on stage intermittently to spice up the sketches that made the whole show glow. That was what I did from 1995 when I studied Theatre Arts and later returned to study Law till 1999 when I graduated. From there, I went to Law School in Abuja and that took me away from comedy for a while. When I returned to Lagos in 2001, it was as if I was starting all over again because I was known in Ibadan but unknown in Lagos. So, I had to break into the comedy circle and this was a gradual process. I got a major break in 2005 and since then, I have been getting offers. It looks like a fast rise but for me it is not. But breaking into the fold here in Lagos was quite a very challenging experience." She told a magazine recently.

She had featured in series of shows including Laff N Jamz with Basketmouth, Holy Laughter with Holymallam and also performed in a Koffi and Owen Gee's duet comic-drama to mention but a few. She actually took her big break at her performance at Night Of A Thousand Laughs in 2006.

Asides comedy Lepacious as she is called, runs a catering outfit and she is also into events management.

Besides these celebrated ones, there are other female comedians who are gradually but steadily making their marks in the industry, thus giving their male counterparts a run for their talents.