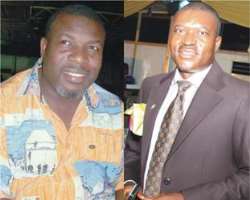 The Board of Trustees, (BOT), of the Actors Guild of Nigeria, penultimate Monday, kicked embattled Ejike Asiegbu out of office as its national president, and set up a caretaker committee, headed by Kanayo .O. Kanayo (KOK) with a mandate to reposition the body as well as conduct a fresh election to usher in a new administration within the next six months or thereabout.

The board, led by its chairman, Ifeanyi Dike, had cited Asiegbu's inability to conduct a fresh election to usher in a new administration to pilot the affairs of the guild despite the fact that the two tenures he was allowed by the guild's constitution, had long elapsed as part of the reason he was removed.

Last Friday, amid tight security at the celebrity hot spot, O'Jez, Surulere, the board swore-in the new executives, made up of KOK as president, Clarion Chukwurah as Vice-president, and actor, Charles Okofar as the guild's spokesman. Bimbo Manuel, initially named the vice-president was conspicuously absent at the ceremony. But the event, rather than being observed smoothly, was marked with slight disagreement between the entertainment journalists and members of the AGN, who witnessed the ceremony. The grouse was the unclear constitutional interpretation, leading to the sacking of the immediate past administration. Shaibu Hussein, a film critic and culture worker, who led other journalists during interactive session to seek explanation regarding the constitutional provision, justifying the action taken by BOT to kick Asiegbu out of office, was completely piqued with the action of the board. But after much disagreement, and offering of explanation by the guild's legal adviser, Barrister Obuest Philips, the journalists who felt unsatisfied with the explanations offered so far, were pleaded to excuse the board's intervention to rescue AGN from the stronghold of Asiegbu.

Showtime Celebrity, last week however, reported how the former president of the body, star actor, Zack Orji, in his reaction, described the board's decision as being hasty, blaming the board for its inability to exhaust all available opinions before moving to kick the president out of office. Orji, himself was a victim of the hasty decision of the board four years ago, when he was also kicked out of office for similar reason. HVP however confirmed the story making rounds that Asiegbu's removal was not unconnected with an unclear transaction which he was alleged to have made using the name of the body with some marketers of Nigerian movies in Zimbabwe , whom he was said to have sold the rights of distribution of local movies in Zimbabwe.

In his acceptance speech, KOK pledged his unalloyed commitment to repositioning the body in a short while. Sounding like the expected messiah to lead the guild to the promise land, KOK declared, “I do not have the intention to run for the guild's presidency. Hold me to it, and hold me to whatever thing this committee would do with its mandate to reposition and conduct a fresh election to usher in a new administration to pilot the affairs of the guild for the next two years.”

Some Nollywood stars who spoke at the occasion, including Charles Okafor, Clarion Chukwurah, Emma Ogugua, Dickson Iroegbu, former PRO of the guild, welcomed the change with great enthusiasm as they called on other members of the body to support the new administration to enable them to accomplish their mandate to reposition the guild.