Nigerian in UK gets life sentence for cop murder 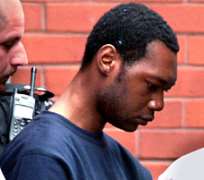 Tennyson Obih, a 29-year old Nigerian seeking asylum in the UK, has been jailed for life with a minimum of 25 years for the murder of June 2007 murder of Police constable Jon Henry.

The late father-of-one had rushed to the scene, where Obih was thought to have attacked two men - window cleaner Steven Chamberlain and David Knight.

Obih stabbed the police constable in Luton town centre's main shopping street, as he was answering a 999 call.
PC Henry died from two stab wounds to the chest.

Obih was also accused of the attempted murder of two other men, Chamberlain and Knight - both of whom the PC was coming to defend-, and a charge of trespass with intent to steal while in possession of a weapon.