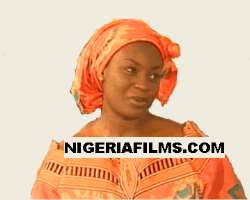 If you have watched Total War, you will recall the face of this very true friend to Uche Jombo and Francis Duru who were a... couple in that film. She is Maureen Solomon now married to Okeke. Although acting for her, is a childhood passion that is dated back to her primary school days but she featured professionally in Alternative, a film produced and directed by Lancelot Oduwa in 2001 and she had since remained in the industry. In this exciting chat with http://nollywoodgists.com, she tells her story to Funmi Salome Johnson.
For sultry actress Maureen Solomon, motherhood has been very interesting and at the same time very challenging.

In the last three years or so, since she got married, she has been in and out of the acting world for the reason of taking care of her family. When asked what new things she has been up to lately and what has been happening to her, pretty faced Maureen says 'I been taking care of my family and also doing one or two things'

On how she feels about her marital status, 'it feels good to be married because as a married person in the industry, I realize that, you tend to get more respected by all and sundry, not that the single ladies don't get respect but as a married person, they respect you more and all that. Married life has been fun so far.'

Her three year old marriage has produced two lovely kids of which she is very proud of.

Being married to a Banker husband, one would imagine the contrast in their chosen careers and would ordinarily want to think that she may not get all the support from him on the job f her choice, but that is not the case at all as Maureen expressed her profound joy and appreciation on the support she has enjoyed from her husband in their few years of being together. 'He has been very, very supportive and every passing day, I just keep thanking God for him because he has been more than supportive to me on my job and in every other thing in life. I also thank God for being married to him because like I always say, I think he is the only man that can marry me in this life time, he has a large heart'

Although, brown skinned Maureen Solomon says she has known her husband for a very long time before they started dating because like she said, she and his brother grew up together in the same area but what attracted her to her now husband was his cute looks and the responsibleness in him. But being responsible is not what is written on the face of a person when you see one. 'If you see a player, you will know and he does not look like a player. Although as time goes on you will now find out many more things about the person but my husband did not look like a player and that stood him out'

Pretty and charming Maureen you will recall made her first entry into the movie industry with her first movie titled Alternative directed by Landslot Oluwa In 2001 and her first major break was in the movie she did not too long after the first one.

For her, being an actress has done her a lot of good of which she says exposure is one of it. “Being an actress has given me a lot of exposure and it has made me met a lot of people I never in my thought I would meet. It has been good because it opens doors where you do not expect” she says.

On the issue of what she thinks are her selling point, she says she does not know but she just believes that if one is good at what she does, she will always excel.

What is her opinion on the type of movies that are being churned out these days, Maureen says 'at the moment, we are marching at a spot but we can go places if we improve on the things we do right now. Things like our story lines, the quality of films we use, if we can upgrade our equipments a little, we will really go places.'

She agrees that at the moment, Nigerian movies are fast circulating but they are yet to meet up with the standard internationally and this she blamed on lack of equipment and proper organization as well as fund. 'right now our movies are circulating far but you still can not compare it with a foreign movie or even a south African movie and this is because of the of the quality equipment they use that we are not using yet. I was watching Emmy awards the other day and I discovered that there were other countries apart from Americans getting the award but because of the quality of our movies we can not get such awards yet. We still have to do some upgrading both in equipment, in acting and in every other aspects and we should stop being greedy.'

Greedy? You'll wonder how, but what just does she mean about that? “I don't know, I don't want to talk about that but what I know us that we should stop being greedy because I think that is the major thing that is killing Nigeria. Everybody knows what needs to be done but the finance is the problem and it is not that the finance is not there but it is just for it to get into the right hands that will not misuse it.'

'Sexual harassment happens everywhere, only that people tend to talk more of the entertainment industry because our job bring us to the lime light' that was her response when asked her opinion on the issue of sexual harassment.

Thinking back in retrospect, acting for her, is a childhood passion because she told Compass that as a primary and secondary school student, she has been featuring in various school dramas and anything they have to do in school, she features and for most of those times, she played lead roles. She also noted that some of her peers back then got the opportunity to go for auditions and had since moved on.'

Like most of her colleagues, Maureen too is looking for something additional to do aside from acting to keep her going. 'I really want to go into something else additionally and I think I will do that once I get my certificate, I will look for a job so that I will have something doing by the side of acting' she says.

On male advances, the Ibo born actress says that those days when she was single, they came in droves but now that she is married, they bother her less because even when they come, she does not hide her status and they politely take their leave. Although there will always be some abnormally stubborn ones. 'I had one once who was always getting me upset over the phone, he would come me and start talking nonsense to me on the phone but ever since that day he called and I gave my husband the phone, he has stopped calling me. There will always be such stupid ones but some of them have been responsible.

On her sexy roles, how does her hubby react to that?

for this beautiful actress, one experience that she found memorable was her first kiss. 'The only thing I can not forget is my first kiss. It was childish and whenever I remember it, I just laugh. My childhood boyfriend gave me the kiss and ran away, it was actually a peck but of course as a kid, you will say it is a kiss. You know it was one of those childish things you do when you just finish school, I was in JSS1 then. He was going back top school and I was going back to school too. It just made me laugh any time I remember it.