What really is happening to our African values? 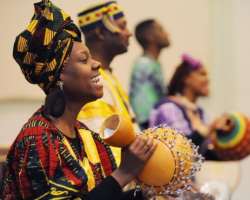 According to him, "their girls go naked and Nigerian girls go about naked too". Very true - to a large extent.

Something funny happened that same day. I spotted another young lecturer (a spinster) wearing a jean skirt and a top exposing her midriff and a jean jacket. She looked really...stylish and all - but...she was a lecturer, for God's sake. Apparently, she took Law students on a course and one female Law student said that as serious as law students seemed, the guys were always drooling over her. In fact, many confessed that they just went for her lectures to see what she was wearing that day.

It is funny that every time we want to talk about our dying values, we always have to begin with the youths.

Nowadays, it is almost impossible to see real 'Nigerian' youths on in the society at large. One time, I opted to wearing outfits made with traditional fabrics throughout the week and everyone kept asking, 'Amina, what happened? Why are you wearing native?' And I replied, 'do I need a reason to wear native?'

In work settings, say the new generation banks, the 'thank God, it's Friday' dress code used to be traditional outfits but these days, it's all things funky. Cool. No problem.

Music and entertainment is certainly not an issue. As much as new records enter the entertainment market every other day, we can count the number of original pieces in them. When I was younger, our secondary school stage plays where 'Wedlock of the gods', Emotan', 'The king must dance naked', 'The lion and the jewel' and so on; but now, I wonder what secondary schools act as school plays.

I watched a certain secondary school week recently and everything they presented consisted foreign solos, songs, dances and I was forced to remember my own time when our teachers hired people to come and teach us local songs in different Nigerian dialects. Then, the most foreign culture we borrowed was South-African.

Do we need to talk about the internet madness? How about even our eating habits? Of course, many young ladies don't see the essence of cooking anymore; after all, there's Mr. Biggs, abi? Come to campus and see where fast food is sending the vulnerable Nigerian girl to. Like high-life musician, Bright Chimezie sang, Eba, amala, akpu have become 'poison' to many. Everybody, ( and girls alike) now prefer Chinese food or Italian whatever. In fact, it is just money holding a lot of them.

Look, I don't have a problem with having a good life. Not at all. I just don't get the point in someone I have know all my life, to start speaking with a foreign accent. Now, that's really the big joke. Most people don't even adopt the American or British accent again, it is now South African or Jamaican accent - really!

We imitate the West in everything we do - the way we talk, the way we walk; even in churches. Do I need to go there?

Anywhere, there are more young people, like the cosmopolitan towns, the funkier your worship, the better. One day, I was watching a 'funky' preacher preach on TV and someone walked into the sitting room, took one look at the TV and hissed. And I said, 'I thought you liked this pastor?' He denied it. And what was his problem with it? He said young people are running away from the orthodox churches because they want where they would go and dance disco. Of course, we all laughed but he made sense. A lot of sense because this person is very funky but would always remind me that when you are in church, you are in church. Surprisingly, all the so-called American preachers we imitate in this part of the world are not as liberal and undisciplined as we think. Have you ever listen to them really preach?
Let's face the bitter truth. Our culture is somewhat uncivilized. For instance, this is 2011 and if we decide to dress in our cultural clothes, our men would most likely be wearing wrappers across their chests and our women - just wrappers covering their chest to knees. We know this is not practicable now, but then, do we need to wipe out any trace of our cultures?

We talked about speaking our local dialects. I am guilty of the fact that we communicate in English in my house but recently, I bumped into a woman from my area and I had the opportunity of really gisting in my language. I tell you, it felt good.

Being African is beautiful - indeed, being Nigerian. No need to imitate a foreign culture. True, there are nice things to learn but please, don't neglect being African. It's a true heritag