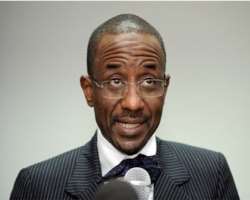 Nigeria's recently nationalised Mainstreet Bank, formerly Afribank , said on Tuesday it had paid the central bank back the 50 billion naira ($327 million) in intervention funding given in a 2009 bailout and the lender was now fully recapitalised.

The Nigerian central bank revoked the licences of Afribank, Spring Bank and Bank PHB on Friday because it said they did not show the necessary capacity to recapitalize following a $4 billion bailout of nine lenders in 2009.

AMCON was set up last year to absorb bad bank loans, exchanging them for government-backed bonds, with the aim of rebuilding commercial bank balance sheets.

In 2009, the central bank bailed out nine banks that auditors deemed to be so badly capitalised they posed a risk to sub-Saharan Africa's second-largest economy. The banks were poorly managed and had overexposure to the capital and oil markets during the global financial crisis.