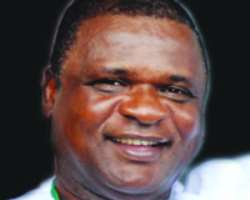 Umeh, in an exclusive chat with Sunday Sunsports, described the draw as a good one for the country, even as he assured that the Eagles would land in Brazil with ease.

His words: 'That was a good one for us. In fact, we could not have asked for anything better. Coach Samson Siasia and I smiled out of the hall at the end of the event. There's no stopping the Eagles. As far as I'm concerned, we are already in Brazil.'

The Anambra State FA chairman said the federation would give Siasia and his team all the support to qualify for the World up. 'We are going to give Siasia all that he might need to qualify, nothing would be taken for granted.

'That we have a good draw does not mean we should go and sleep. We have not forgotten what happened in 2006 when Angola came from nowhere to stop us from going to the World Cup in Germany.

'As we know, Siasia is building a new team with young players and we hope that by next year, we would have a solid side that could send our opponents to the cleaners,' he said.

Nigeria was last week drawn into Group F alongside Malawi, Kenya/Seychelles and Djibouti/Namibia, countries that are considered as minnows in African football.

The winner of the group qualifies for the third and final round of the race.