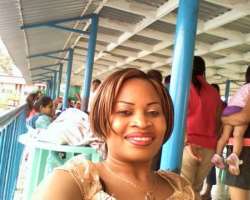 Top Lagos beautician, Folake Eletu-Odibo who runs a beauty parlour tucked inside the prestigious Magodo GRA called New Look is set to host his esteemed customers and intending ones to sumptuous meal and drinks courtesy her New Look Unisex saloon. In the spirit of the season, the event is slated to hold on Valentine's Day, February 14th, 2009.

The special Valentine party which is slated to hold at Bashir Shittu, Avenue, Magodo, GRA, Lagos is expected to have free makeover worth over N5, 000 courtesy a United Kingdom's Supercover. Aside free food and drinks that would be surplus on this lovers' day, play according to the brief, there will also be raffle draw where customers or guests will be their way to fortune with Mini Kitchen, Microwave Oven and BBQ Grid for the first to third winners. Other consolation prizes for adults and kids include, Thunder Buggy Ride on car, a dinner set, WAHL Pro Clippers, Nokia Phones to mention but just a few.