MOST NIGERIAN COMEDIANS ARE JOKE THIEVES 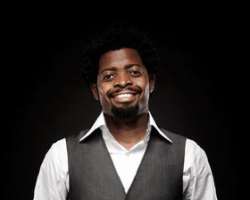 To those who love to laugh their hearts out and consequently patronize the comedy circuits, Bright Okpocha popular known as Basket Mouth needs no introduction. He is one of the high profile comedians in the country. Starting from a humble beginning, the dreadlock wearing comic is now reaping it big and smiling to the bank. In an encounter with Blockbuster in Lagos recently, Basket Mouth talked about his burgeoning career including issues bordering on comedy. Excerpts:

Background
I am from Abia State, but was born on Uzor Street in Ajegunle, Lagos. I'm the third born in the family of seven children: 5 boys and 2 girls. I was just two or three years old when we moved to Apapa, and then to Ebute-Metta and Isolo. I had already become an adult when we lived in Ebute-Metta. I had my secondary school education in Apapa and from there I got admission into UNIBEN.

Starting comedy
Professionally, I started comedy seven years ago. Before then, I have been doing comedy back days in secondary school due to the flair I had for it. When I left secondary school, I realized that comedy has been my lifestyle. Then, I discovered the talent and made it a serious business. I got motivated from a video done by Eddy Murphy. It was what I saw in this video that made me realize my talent, and the decision to delve into the world of comedy unfolded. Doing comedy is as a result of the passion I have for it as it is what I love doing. In the first place, I was not doing it because I wanted money but because I love doing it.

My style
I have a mild style of cracking jokes which is keeping me on top of the game. The style is about talking about what people do everyday and I just make it funny. I employ this style because it keeps me in the minds of the people. When I say something and it comes to pass, the next thing that comes to people's mind is that Basket Mouth don talk am o! That way, I'm always fresh in the minds of the people.

Qualities of a good comedian
First of all, you have to be original. The talent has to be inborn not just that you wake up one day and say you want to become a comedian without having flair for comedy. If you want to complement it, you have to be able to create your own ideas and materials, and be different from others.

Comedy back then
Comedians like Tee A, Julius Agwu, Alli Baba, and Okey Bakassi were already existing but we were small comedians in the industry then. It is only that the industry is now professionally inclined and more corporate.

Between young and old comedians
The market is open for everybody. Just like we had a lot of banks back then but at a time many faded away because they could not cope with the CBN regulations. When the time comes, we will know the original from counterfeits. The ugly development in the industry now is that people steal jokes. About 80 per cent of comedians are not original. But now, anybody can come and do whatever he has to do. It is a free world.

Between local and foreign comedians
We are very far behind. We have not even started here in Nigeria. Even though, we are far behind we are still the largest exporter of comedy. Nigerian population is higher in any comedy show, and not only in comedy but also music and movies.

On marital life
My marital life is good. Marriage is a different life entirely. It makes me more responsible as a man. I'm more in control of myself. I always bear in mind that anywhere I go, I have to go back home to my family. I can't discuss my kind of woman. I already have one and I don't have to describe her because I don't want to be advertising who my wife is. As the Bible says, 'he who finds a wife; finds a good thing', my marriage is a blessing from God.

Role models
When it comes to role models, I look outside Nigeria. My focus right now has created new role models for me like Chris Rock, Glue, Martins Laurel, and Kelvin Harts. These are the guys that I don't want to be like but like to share stage with. I envy them not in a bad way and I wish I accomplish a lot of things they had accomplished.