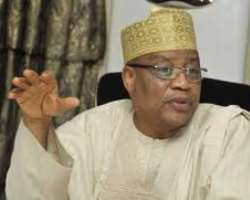 Former Inspector General of Police, Alhaji Ibrahim Coomassie, has blamed the problem confronting the Nigerian police on the decision of Murtala/Obasanjo and Gen. Ibrahim Babangida regimes to reduce powers of the police.

Speaking yesterday at Arewa House Kaduna at a one-day town hall meeting organized by CITAR-NGO, Coomassie said that the Ministry of Police Affairs has virtually hijacked the powers of the Inspector General of Police in terms of financial control and accountability.

'Instead of assisting the Presidency to process financial and policy matters for the police, the Ministry of Police Affairs has completely taken over the financial control of the force from the Inspector General of Police,' Coomassie said

He delivered a paper entitled, 'Thoughts on current national security challenges,' noted that the Babangida regime further reduced the powers of the Police when he created the Federal Road Safety Commission, the National Guard and the National Drug Law Enforcement Agency to perform some of the functions of the Police.

Accordint to him, 'the dismembering resulted in the proliferation of other bodies to perform police functions, thus weakening the force.

'The altering of the command structure of the force with the creation of four additional Deputy Inspectors General also affected the performance of the force because it created rivalries and animosity within the hierarchy of the police.

'The current civilian administration in the country also dealt a blow on the police with the establishment of the Economic and Financial Crimes Commission (EFCC) and the removal of the Federal Road Safety Commission from the police after it was returned to the police by the Abacha regime.

'Military intervention in the governance of the country has done more harm than good to the image of the police force.

He also queried the current modalities for drafting the military to curtail civil unrest in the country.

'Destabilizing excisions and creations to form parallel or quasi law enforcement agencies, which were given priority rating but continue to perform police functions and perpetual neglect of the Nigeria police over a prolong period of time, has led to lack of professionalism and lack of equipment to combat crime and other vices.

'Recruitment and training have been compromised as a result of conditions of service, which do not attract the right material as those with the right qualifications do not apply to join the force'.

'No alternative was provided. Even with the creation of more states, little was done to boost the manpower of the force, to the extent that mounting criticism of the police by members of the public greatly escalated.

'Another setback during the era was mainly bureaucratic impediments of the supervising ministry-Ministry of Police Affairs. It hampered the efficient and effective management of the police, particularly from the viewpoint of the financial control and accountability.

'The department, instead of assisting the presidency to process financial and policy matters of the force, completely took over the financial control for the police and dictated the utilization of the funds allocated, making purchases for the force without consulting the Inspector General of Police.

'The next set of military governments saw the police declining more and more, even though some showed appreciation of the difficulties the force was facing. For instance, the Buhari regime seized some of the operational vehicles purchased by the civilian administration and was barely able to sustain the force.

'The Babangida regime dismembered the force further as with the Murtala/Obasanjo regime. The Nigerian Police during Babangida lost its Highway Patrol unit to the Federal Road Safety Commission (FRSC), it lost the Mobile Police Force to the National Guard.

'A National Drug Law Enforcement Agency (NDLEA) was also established to assume full responsibility for the control and or suppression of illicit traffic in narcotic drugs. The Interpol section of the Force Investigation and intelligence Bureau (FIIB) had hitherto performs this function.'

'This dismembering resulted in the proliferation of other bodies to perform police functions, thus weakening the force. The command structure of the force was altered creating four additional Deputy Inspectors General thereby infusing rivalries and animosities within the force.' He stated. END