ACCOUNTABILITY ON THE DAY OF JUDGEMENT 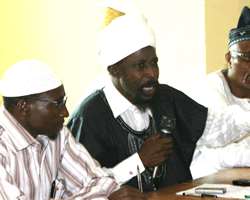 • The Amir/President of Ahmadiyya Muslim Jamaat of Nigeria, Dr. Moshood Adenrele Fashola flanked by the General Secretary, Dauda Abiodun Raji (left) and the Deputy Amir, Engineer Rasak Alhassan at the press briefing on the nation and other issues at Ahmadiyya Headquarters, Ojokoro, Lagos.

The most important events that will happen on the day of Judgement are when we will be held accountable for our deeds and when we will be questioned by our Lord Allah (S.W.T.).

There are many Quranic verses and ahadith that tell us about these events so that the believers will prepare themselves for the most important, final test. They can prepare for this test with their strong faiths and with their righteous deeds.

Allah (S.W.T.) says what could be translated as, 'Draws near for mankind their reckoning, while they turn away in heedlessness.' (Surat Al'Anbia', Verse 1)

There will be two different ways that Allah will hold people accountable for their deeds.

1. In the first way, Allah will quickly and easily skim through the people's deeds, and will allow them to enter paradise safely. Those who believe strongly with sincerity, will enter paradise in this manner.

2. In the second way, Allah will discuss the people's deeds in depth and in detail, and will hold them accountable for each evil act they committed. Then Allah will send them away to the Hell Fire. These are the disbelievers, hypocrites, those who are weak in their faith, or those who are not sincere will enter the Hell Fire in this manner.

Allah (S.W.T.) describes that Day in what could be translated as, 'On the Day when every person will be confronted with all the good he has done, and all the evil he has done, he will wish that there were a great distance between him and his evil.' (Surat Al-Imran, Verse 30)

The good believer will have an easy reckoning and Allah (S.W.T.) will cover up his sins after He reminds him about them. Then he will forgive him from his sins, and allow him to enter paradise. This is concluded from a hadith reported by Imams Buhkari and Muslim in which the prophet (S.A.W.) said: 'Allah will bring the believer very close and privately and ask him 'Do you know this sin? Do you know that sin? The believers' reply will be, 'Yes Oh Lord,' until he is reminded about all of his sins, and he thinks he will perish. Then Allah will say 'I covered up your sins during your life, and I will forgive your sins today.

Then he will be given his book of good deeds. But the unbelievers and hypocrites will be asked about their deeds loudly in front of the creatures. 'These are the ones who lied against their Lord!' No doubt! The curse of Allah is on the ' Dhalimun '(polytheists, wrongdoers, oppressors, etc.)!' (Surat Huud, Verse 18)

Allah will confront His servant directly, without a mediator.

The messenger (S.A.W.) said: ' Allah will talk to everyone directly, without a translator. The person will look to his right, and will not see anything but his deeds. Then the person, will look in front of himself and will see nothing but the hellfire facing him. So protect yourself from Hellfire even by giving a charity of half a date.' (Reported by Imam Bukhari).

Prayer will be the first thing a person will be questioned about on the Day of Judgment.

Prayer is a right of Allah (S.W.T), and people will be questioned about it. They will be asked if their prayers were done completely and with good quality. If a person performs prayers with the utmost of quality, then the person will be saved. If the prayers were done incompletely or half-heartedly, then his voluntary prayers will suffice for the shortcomings.

The Messenger (S.A.W.) told us in an authentic hadith , 'The first thing the people will be accountable for on the Day of Judgment is prayer, Allah will say to His angels (even though he already knows) : 'Look at my servants prayers. Were they complete or not?' If they were complete It will be written as complete. If they were not fully complete Allah will say: 'See if my servant has voluntary prayers, If he has them Allah will say: Complete his obligatory prayers shortage with his voluntary prayers.' Then the rest of his deeds will be dealt with in the same manner.' (Reported by Imams Ahmad, Abu Dawood, An-Nisa'i, and Al-Hakim).

We will be asked in the Day of Jajument about five things.

The prophet Muhammad (S.A.W.) said: 'The son of Adam will not pass away from Allah until he is asked about five things: how he lived his life, and how he utilized his youth, with what means did he earn his wealth, how did he spend his wealth, and what did he do with his knowledge.' (Good hadith reported by Imam At-Tirmithi).

We will be asked in the Day of Jajument about all of the blessings and bounties that Allah gave us in this life. Some of these blessings may include our good health, our wealth, our food and drink, our ride and our home, etc. Allah (S.W.T.) says in the Noble Qur'an, what could be translated as, 'Then, on that Day, you shall be asked about the delight (You indulged in, in this world). ' (Surat Al-Takathir, Verse 8).