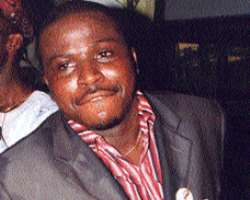 Gbenga Adeyinka 1st CFR crept into the public psyche as a standup comedian in a dramatic way. His first introduction was an appearance at a function some years back. Since then he has perfected his art to become one of the best in the comedy world.

He is a graduate of English from the University of Lagos with Television programmes on AIT, MBI, GALAXY T.V and AFRICA MAGIC on DSTV and he also appears on segments on programmes on many television shows.

His humor emanates from an informed mind with a lot of depth and richness in meaning. He is a polyglot whose presentation medium is English, blended with the three major Nigerian Languages and a working knowledge of three other international languages.

His comedy and music shows tagged “Gbenga Adeyinka 1st and friends…. As well Comedy Unleashed are leading upscale comedy event that continues to gather greater momentum and win the hearts of new fans.

Information reaching Nollywoodgists.com reveals that, Gbenga Adeyinka is currently shooting a new Yoruba comedy program that is set to promote Yoruba culture and heritage in a comic way.

The program is said to be contemporary Yoruba program that we have different segments such as (IJINLE PAMPAM)which it's a section where celebrities are being interview.(AWUYARI>KILONSELE) will be a form of short drama segment that will analyze the societal issues in a comic way. (ORO IGINLE) it's a proverb segment where they ask viewers questions, while Gbamu Gbamu is the Yoruba version of Laff Mattazz which will be hired on Africa Magic Yoruba.