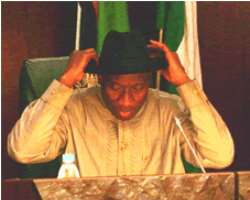 The Special Adviser to the President on Media and Publicity, Ima Niboro, disclosed to State House correspondents shortly after the meeting which took place in the Presidential Villa, adding that the manufacturers had agreed to do everything necessary to meet the one month time frame.

Niboro said President Jonathan was saddened by the development hence the decision to call a meeting of the top five manufacturers to find a way out.

Also briefing newsmen after the meeting with the president, the Chairman, Cement Manufacturers Association of Nigeria (CMAN), Joseph Makoju, in company of the Minister of State for Commerce, Josephine Tapgun, the Chairman of Dangote Group, Alhaji Aliko Dangote, Chairman of BUA Group, Alhaji Abdulsamad Rabiu and Country Manager of Lafarge Cement, Jean-Christophe Barbant assured that the prices would come down before the deadline.

According to Makoju, both the president and the manufacturers had agreed to address the causes of the product scarcity and high cost as it concerned government obligations as well as what was required on the part of the manufacturers.

Also speaking, Dangote disclosed that the major problems the industry was facing were in the areas of supply of Low Pour Fuel Oil (LPFO) consumed by the industry as well as the increase in diesel from N70 per litre to about N170 per litre which had led to his group losing 6,000 trucks recently, adding that the recent post-election crisis in the North which caused a shut down of production for weeks was partly responsible for the hike in price.

Dangote, who announced that arrangement was being made by his companies to sell cement directly to retailers buying as little as one truck as part of moves to bring down prices, observed that marketers were also capitalising on the increase in the pump price of diesel to increase the cost of transportation hence the additional cost to the final consumers.

Dangote said, 'the other issue is that of transportation. You know once there is an increase of N1 in diesel, transporters will take that opportunity and increase their charges. When you look at when we started producing cement at Obajana, cement for the first time became cheaper, it is still cheaper than the price of Lagos while this was not the case before now.

'So you can see that we are doing quite a lot and I can assure you that in the next few weeks these prices will definitely come down,' he said.

Dangote also disclosed that his organisation had ordered for 5,000 additional trucks to ameliorate the problem of haulage of cement to all parts of the country saying, 'we are doing all that to try and bring down the cost of transportation but we will do it in such a way that it will not affect other transporters because we also need them in the business to survive.

'Cement will definitely be exported worst case scenario by first quater of next year. Nigeria should be earning a lot of foreign exchange and I can guarantee you that cement would be one of the major foreign exchange earners in the next few months,' he stated.

Also throwing more light on the discussions held with President Jonathan, the Chairman of BUA Group, Rabiu, noted that some of the challenges that caused increase in cement prices were being addressed some of which included the closure of Kaduna Refinery and cement companies based in the North which were closed as a result of the post-election crisis.

'There were challenges and some of them have been taken care of, namely the issue of LPFO. Kaduna Refinery was out of production for some time but is now back on stream and most of the companies located in the North like Ashaka Cement, Sokoto Cement, Benue Cement rely entirely on LPFO. So, when Kaduna Refinery had an issue, a lot of companies were not able to produce and that has already been taken care of,' he stressed.

The Country Manager of Lafarge Group, Barbant revealed that the meeting also agreed that there would be more investment in the cement sector to make the product more available and cheaper.