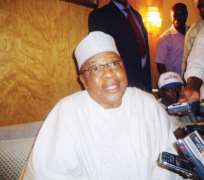 SAN FRANCISCO, May 15, (THEWILL) – The debate surrounding the controversial power sharing arrangement of the ruling Peoples Democratic Party (PDP) has refused to be buried as former military dictator, General Ibrahim Babangida (rtd) today faulted the party for its double-speak on the contentious issue.

Recall that the former leader had broken ranks with the leadership of the party following its decision to jettison the arrangement in order to allow President Goodluck Jonathan, a Christian minority from the south emerge as the party’s Presidential candidate even though the party had earlier zoned the presidential ticket to the north.

The leadership of the PDP had in a meeting on Tuesday at the Obudu Mountain Resort, Calabar Okayed the party’s previous zoning arrangement with a few changes. The party zoned the National Chairmanship position to the North East alongside the Deputy Speakership seat; North Central was given the Senate Presidency; South East got the Secretary to the Government of the Federation (SGF), Deputy Senate President seat and the Chief Whip of the House of Representatives position; the South West was given the Speakership and the Senate leader position. South South got the House Leader position, while the North West got the Senate Chief Whip position.

The President and Vice President position is currently occupied by the South South and North West zones respectively.

However, the objections to the zoning of the House Speaker seat to the South West by South South and Northern legislators in the House of Representatives has put the issue on the front burner once again—the South East wants the Speakership position following their massive vote for the party in the Presidential election.

But Babangida in a statement by his spokesman, Mr. Kassim Afegbua carpeted the party for sticking to the zoning formula after the presidential election accusing it of inconsistency.

The former PDP presidential aspirant also denied a newspaper report that he was scheming to become the Chairman of the Board of Trustees (BOT) of the party.

Babangida’s statement reads: "General Ibrahim Babangida, GCFR has been watching with very keen interest the dimensions of political commentaries in the country in the last two weeks particularly after the conclusion of the general elections.

"Such observation has enabled him to see human inconsistencies and the dual role that people tend to play in the name of politics. He is pained at heart to conclude that with the caliber and quality of those we have around at the political circle, the nation may just have to wait for another generation to get things right.

"One of the issues that convey his shock and surprise is that of zoning of political positions in the country. Following the heated debate that has enveloped the nation in the last one month on which zone to produce what position and vice-versa, General Babangida is wondering over some Nigerians’ ingenuous capacity to make a 360-degree u-turn on the issue of zoning.

"When the Northern Political Leaders’ Forum raised concerns over the zoning formula of the Peoples’ Democratic Party and the deliberate disobedience of that constitutional provision, some Nigerians called the body all manners of names.

"While some argued that zoning should be discarded and merit should be the subsisting criteria, the voice of those who stressed the importance of zoning was lost in the maddening crowd. After the elections, the music has suddenly changed and the chorus is now zoning, zoning, zoning and zoning. How time heals.

"General Babangida is of the considered opinion that those who aspire to lead the country at different levels of government must come out with certain qualities that will portray them as patriotic and nationalistic.

"There will be no hope for the country if those who double-speak are made to preside over certain levels of government in the name of dubious politicking and zoning which they never believed in.

"The character indices of our leaders must be known at different times and levels. Their elements must be visible and patriotic. Their conduct must be above pecuniary interest. And above all, their desperation must be checked within the ambit of law.

"If those who shouted hoax over the issue of zoning in the PDP yesterday, [saying as it were, that the party’s constitution could be jettisoned], are now made to be beneficiaries of zoning in the Party today, then we all are doomed as a nation.

"Those who shy away from such incontrovertible political requirement to put paid to all cries of marginalisation cannot simply wake up overnight to be beneficiaries of what they never believed in. In a democracy, we should learn to play by the rules no matter how painful it might be and no matter whose ox is gored.

"General IBB does not have any interest in the Chairmanship of the PDP Board of Trustees, whether now or in the foreseeable future," the statement added.