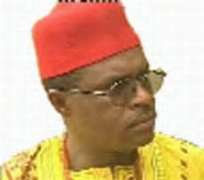 The entertainment industry has been thrown into mourning just a day to the one year remembrance of the late Da Grin.

However, actor Nwosu lost the battle barely 24 hours after he fell into coma as a result of liver problem.

He died at the Military Hospital, Yaba, where he was been treated.

Actor Kanayo O. Kanayo and celebrated film director, Lancelot Oduwa Imasuen who confirmed his death, said he was "a gentleman and a seasoned actor. The industry has lost one of its finest actor.

"It is very shocking and sad indeed. The industry have not finished mourning the sudden death of the comedian,  C John, before another death occurred. I'm heart broken." lamented Lancelot.

Ashley Nwosu, while alive, often played the role of husband, Pimp or 'Sugar Daddy' and was an star per excellence.

He has starred in countless number of movies