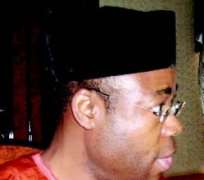 The senatorial candidate of the All Progressives Grand Alliance for Ebonyi Central, Senator Emmanuel Onwe, speaks on his chances at the April general elections,in this interview with OZIOMA UBABUKOH. You have been on the campaign train for some time, how would you appreciate the entire exercise?

I am delighted by what we have seen so far. We have received very enthusiastic response from the electorate across the four local government areas in Ebonyi Central. The people of Ishielu, Ikwo and Ezza have shown tremendous support. It has been a very encouraging two to three months campaign. The reception was wonderful. Our message, I think, was very attractive to the people, because we tried to give the young ones hope. We come from a state where it is very difficult for young people to have prospects. Let me set an example of what positive prospects represent. It is not very hard: if you are determined, if you have focus and do not allow challenges to weigh you down, you will certainly go places.

Several political parties in Ebonyi were denied access to the voters. How did you cope with this and don't you think it may affect your chances at the polls on Saturday?

It takes guts to ride this sort of storm. If people like a message, they will make themselves available to hear that message, irrespective of the obstacles. I have seen a situation where very highly placed people in the state have been making decrees barring opposition parties from using public facilities, intimidating people, frightening people, shooting guns sporadically to scare people away. But my joy is that we have a group of electorate who, by their strength of conviction, have made up their mind on the kind of change they want to bring about and these various forms of intimidation have not driven them away. This is very encouraging. The second aspect of it, as I said before, is that once you have a message that rings and resonates with the people, then of course they would be prepared to sacrifice for that message and follow you to the implementation of the message.

Another major concern is the credibility of the current voter register. There are speculations that the Independent National Electoral Commission will discard the 2011 voter register for the previous one. What is your take on this?

I think that information should be regarded as a mere rumour. It is absolutely inconceivable that INEC would discard data that this country paid nearly N90bn to acquire. The mechanics of the 2011 elections, from all indications, will be quite different from previous elections. Already, INEC is demonstrating, through instructions and the nature of the training it is giving to federal workers that will be responsible for conducting the elections, that it is going to use data generated from the Direct Data Capturing machines for accreditation and voting. I believe that is correct, because if INEC were to revert to the old register, it is going to be more cumbersome for them to conduct an election compared to the current system. It doesn't make sense that they would gaze backwards.

But don't you think the intimidation from some state governments against the opposition parties will tell on your chances at the poll?

Absolutely not. The people are not as idiotic as the despots presume they are. Remember, when the All Nigerian Peoples Party presidential candidate proposed to use the stadium, a public facility built with taxpayers' money, for his flag-off rally in the state, the governor decreed that the stadium shouldn't be used for that purpose. Our governorship candidate was also denied the use of the stadium. The aftermath was not detrimental to the ANPP nor to APGA but rather, the despotic and ignorant nature of the Peoples Democratic Party government was exposed. Even the gun shooting that has become so rampant across the state has not deterred us. It has rather generated a rare zeal and stubborn determination. Anyone who witnessed the official flag-off campaign ceremony of the APGA in Abakaliki would certainly tell you that the people of Ebonyi State are tired of the current incompetent government. They are eager to listen to the positive message of hope and of change. The people's resilience is a crucial part of that change and APGA will deliver it.

With the recent happenings, don't you think the elections in Ebonyi State could be marred by violence?

Sensing defeat and disgrace, the only solution adopted by the ruling party in the state is the desperate effort to thwart the election and make the process unmanageable. Yes, there will be violence, but it is going to be contained. Violence is detrimental to any process; there is no doubt about it. But when the majority of the electorate insist on a free process, then a free process will prevail in spite of devious plots and corrupt manipulations.

Don't you foresee another round of litigation after the elections?

Yes, litigation is a natural aspect of elections particularly in a society such as ours. Let us assume that this is going to be a slightly different election from what we have seen before. The presumption must, therefore, be that the outcome will be different and the litigation that will follow will also be different. A variety of issues before, during and after elections will always lead to litigation. We can't dispute that. When I prevail on Saturday, my victory will be so resounding and it will have been brought about by unimpeachable transparency.