WHY FOREIGN RESERVE IS LOW, BY GOVT 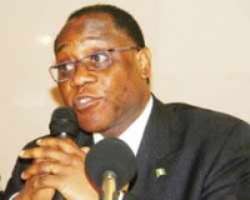 THE Federal Government yesterday explained the depletion of the country's foreign reserve from $42 billion in 2008 to less than $32 billion in 2010, saying it was a price the country had to pay for maintaining a stable exchange rate.

Speaking at an interactive session with the organized private sector under the auspices of the Debt Management Office (DMO), the Minister of Finance, Dr. Olusegun Aganga, said the country was largely import-dependent and had consistently had deficit budgeting.

'We could have financed these consistent deficits either from borrowing or drawing from our savings or reserves and we decided to do a combination of both, and the latter has resulted in an unavoidable depletion of the reserves,' said the minister.

Aganga also said that external borrowings so far stood at $4.8 billion, while domestic debts stood at N4.55 trillion, assuring that there was nothing to worry about, since the ratios of both external and domestic debts to gross domestic debt (GDP) for the country was low when compared with those of  other countries.

He explained that what mattered in the long run was not the amount borrowed per se but what the funds borrowed were used for.

He equally explained that the Sovereign Wealth Fund (SWF) had been established to ensure better management of the country's excess crude account.

The three-tier baskets for the SWF, according to Aganga, are savings for investment; a stabilization fund for augmenting the budget; and an infrastructural fund for the provision of the much-needed infrastructural facilities within the economy.

Speaking further about infrastructure, the minister revealed that the Federal Government had received 331 foreign proposals and expressions of interest for the privatization of the power sector.

While fielding questions from journalists, Aganga assured that the Federal Government had taken valid steps towards a better management of the economy.

Such steps, according to him, included the introduction of performance-based budgeting; the setting up of performance monitoring teams for projects; the proposal to introduce accountability and transparency for fiscal discipline; and the establishment of the Sovereign Wealth Fund.

Aganga said that an import substitution programme had recently been instituted by the Federal Government to ensure that the situation whereby there is so much uncultivated land and the nation still imports food; flares so much gas but still imports fertilizers; and produce so much crude oil yet import so much fuel, will all come to an end.