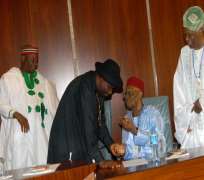 In an open letter to President Jonathan dated 23 March 2011 and signed by SERAP Executive Director Adetokunbo Mumuni, the group expressed “serious concerns over continuing executive interference in the work of the ICPC.”

The group said that it believed that “the arbitrary removal of Angulu as Acting Chairman of ICPC is inconsistent and incompatible with Nigeria’s obligations under the UN Convention against Corruption to which Nigeria is a state party, and directly undermines the independence of the Commission. Angulu’s removal also negates the oft-expressed commitment of your government to tackle high level official corruption and to strengthen anti-corruption mechanisms in Nigeria.”

“By arbitrarily removing Angulu from office, the Nigerian government have again weakened the ability of the ICPC to successfully address the endemic problem of corruption and its impact in the country,” the group added.

“We are concerned that the speed with which your government asked Angulu to vacate office would seem to suggest that your decision was taken in bad faith. The unexplained and unjustified removal of Angulu demonstrates the government’s lack of real commitment to the fight against corruption. It also amounts to a deliberate attempt by the government to undermine the independence and integrity of the ICPC in the discharge of its statutory mandates,” the group said.

According to the group, “We believe that strong political will and the preparedness to take firm action are so critical that in its absence no other anti-corruption measure can bring sustainable results. Wavering determination to fight corruption makes a mockery of Nigeria’s commitment under the UN Convention against Corruption.”

The group also said that, “Apart from undermining the credibility of the ICPC, the arbitrary removal of Angulu also violates the provisions of the Constitution, the ICPC Act, and the UN Convention against Corruption.”

“In particular, the UN Convention against Corruption imposes clear obligations on Nigeria to strengthen measures to prevent and combat corruption more efficiently and effectively”, and to “promote integrity, accountability and proper management of public affairs and public property”. Furthermore, the UN Convention against Corruption requires states parties to ensure that national anti-corruption institutions such as the ICPC “are granted the necessary independence and human and material resources to enable them carry out their functions effectively and free of any undue influence,” the group added.

According to the group, “Reports suggest that Dr Angulu was removed by your government following the probe of an alleged N6billion fraud in the National Judicial Institute (NJI) and trial of a minister. Dr Angulu has been asked to proceed on terminal leave based on a letter from the Office of the Attorney General of the Federation and Minister of Justice, Mr. Mohammed Bello Adoke (SAN). The March 12 letter followed a purported directive to the Minister by your office. Reports also suggest that your government seems to be “uncomfortable with the recent combative anti-corruption drive of ICPC.”

The group therefore asked President Jonathan to: “use your position and good offices in this matter by re-instating Angulu back to his position, and by ensuring and respecting the independence and freedom of action of the ICPC. This will be entirely consistent with your expressed commitment to fight high level official corruption and the impunity of perpetrators in the country.”

The group also asked the President to: “Begin to implement fully anti-corruption laws and standards, including the ICPC Act, and the UN Convention against Corruption, including by allowing the ICPC to continue to operate with full independence and freedom of action.

“Comply fully with Nigeria’s international obligations, including under the UN Convention against Corruption and grant to the ICPC an independent source of funding and freedom of action required to carry out its mandates.

“Improve the existing anti-corruption measures, in particular the ICPC Act. The executive should not hamstring the ICPC or any other anti-corruption agencies for its own interests. The ICPC Act should be amended to include provisions for securing greater independence for the Commission and its personnel. The ICPC must be detached from any political harassment or manipulation. In addition, the government must adopt a transparent, ethical and inclusive process that allows the civil society and other stakeholders to participate fully in any amendment of the ICPC Act.”