CONTEST IS AMONG ALL CANDIDATES, SAYS JONATHAN'S TEAM 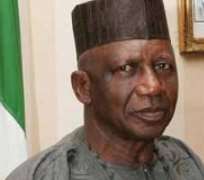 ACN crisis taints Ribadu's rally in Zamfara
THE Goodluck/Sambo Campaign Organisation yesterday said the resolve of President Goodluck Jonathan to provide good leadership for the country in the next dispensation informed his vigorous campaigns across the federation.

Its Director-General, Senator Dalhatu Tafida, who spoke on Jonathan and the Peoples Democratic Party (PDP) intense campaigns in all the 36 states of the federation, explained that the action was due to the fact that the other presidential candidates were not being underrated by the President and the ruling party.

He said: 'Whether they pose any threat or not to us, we are not underrating any candidate no matter the party he belongs. They are all forces to contend with, so we are not leaving any stone unturned in our effort to outwit them.'

Jonathan is the only presidential candidate for the April elections that has so far taken his campaigns to all the states in the country.

For the Action Congress of Nigeria (ACN) presidential candidate, Malam Nuhu Ribadu, it was a rough deal for him yesterday in Gusau, Zamfara State as suspected political thugs moved against his convoy.

The angry youths barricaded and stoned his motorcade as he approached the palace of Emir of Gusau, Alhaji Muhammad Kabir Danbaba to pay him homage.

The Guardian learnt that it took the intervention of the police and other security personnel to disperse the crowd before Ribadu was sneaked into the palace.

It was learnt that the action of youths' attack on Ribadu might not be unconnected with the intra party crisis in the state chapter of the ACN following the replacement of its governorship candidate, Alhaji Sarki Surajo with Alhaji Bala Muhammad Dansadau.

The aggrieved youths, who stormed the Emir's palace complained against the way the state leadership of the party replaced their candidate and insisted that Ribadu must work with him.

Surajo has continued to maintain that he remains the ACN standardbearer in the state.

At the venue of his rally, Ribadu accused the Peoples Democratic Party (PDP) of fuelling the political crisis rocking the country.

'The party (PDP) in its guest for power is gradually planting seed of discord and heating up the polity. It seems most Nigerians do not have confidence in the party and its government,' he said.

At the Gusau airstrip, where his supporters gathered, Ribadu said the antecedents of the PDP in the last 12 years shows that it is the major problem of Nigeria.

And from his sick bed abroad, Chairman of the All Progressives grand Alliance (APGA) Board of Trustees (BoT), Chief Chukwuemeka Odumegwu-Ojukwu, at the weekend sent a solidarity message to the party at its governorship campaign rally in Aba, Abia State. He urged the electorate to vote en mass for Jonathan and all APGA candidates in the April elections.

Odumegwu-Ojukwu's message was delivered by the APGA National Chairman, Chief Victor Umeh at the rally, which was held at where Chief Reagan Ufomba, the party's governorship candidate was presented to the public and given the APGA flag alongside other candidates by Umeh.

Also, Minister of Defence, Adetokunbo Kayode (SAN), at the weekend, conducted a house-to-house campaign for Jonathan in his hometown of Ikaram-Akoko in Akoko North West Local Council of Ondo State.

The minister, who was accompanied by a handful of Peoples Democratic Party (PDP) faithful from the community, told his hosts that if given the opportunity of continuing in office at next month's election, the President would implement policies that impact positively on their wellbeing.

Umeh, who charged the crowd to ensure that governors elected under the party's platform implement its manifesto and programmes, said the governors would be subjected to certain oath-taking he did not specify, adding that 'APGA will lead you to an oath to ensure that you fulfill your pledges and APGA manifesto to Abian people.'

Umeh said: 'The time for imperative change in Abia State, especially in Aba, is now. There has been no significant change in Aba for decades. To redress this, Abian people must vote in APGA, which has set this task for Ufomba and he is here before you to pledge to do so.'

Accepting the challenge, Ufomba unfolded his 12-point plan for the state, saying that on assumption of office on May 29, 2011, he will declare Aba a disaster town and relocate it temporarily 'to ensure immediate commencement and completion of roads and drainages in the area.'

His plan for Aba include creation of a free trade zone, abolish all forms of levies and taxation, provision of first-rate security system, construction of international market with fire resistant warehouses, generate revenue from wastes, and completion of the Ibrahim Badamasi Babangida (IBB) Technology Village.

Others are the construction of a six-lane ring road, dredging of Aba River, creation of 500,000 jobs and prompt payment of workers' salaries, pensions and gratuities.

Kayode told the electorate that Jonathan would give assistance to the rural farmers stressing 'you people are the ones feeding this country and the country depends on you for industrial development, we cannot afford to leave you unassisted.'

'There is no two way to winning an election. You must convince the electorate by presenting to them in the language they would understand. The era of brigandage during election is gone forever in this country. So if you want to win, you must appeal to the voters who are the most important group in the electoral process. That is what we are doing here,' he said.

Tafida, who eulogised Governor Sule Lamido of Jigawa State for his role in ensuring that Jonathan emerged the standard bearer of the PDP at its last December primary, spoke at the PDP presidential rally in Dutse, confirmed that at the initial stage, it was difficult for the organisation to woo the governor, who was firm on the zoning issue, however, 'when he was co-opted he changed the game for the better.'

Initially, Lamido was one of the major proponents of the zoning of the Presidency to the North and openly opposed Jonathan's intention to contest for the office.

He later joined the Jonathan train and ensured that Jigawa delegates gave him 82 per cent votes at the party's primary.

'When we started we had some problems because Lamido could not be brought on board but since he came on board he has done very well and things changed,' he said.

Tafida recalled how he admired Lamido in 1979 as a member of the House of Representatives under the platform of the Peoples Redemption Party (PRP) platform, saying he was full of ideas.

Tafida urged the Jigawa electorate not to vote for any other candidate except Lamido, who he rated as an achiever.

He equally canvassed votes for Jonathan because providence placed the responsibility to lead Nigeria on him.