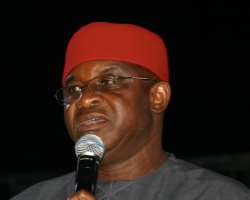 ABUJA, March 15, (THEWILL) - The Freedom of Information Bill (FOIB) ran into trouble waters on the floor of the Senate today as objections and allegations of adulteration characterized the debate.

Nonetheless, barring any similar hitch the Senate may on Wednesday pass the bill into law. This effort is coming barely three weeks after the House of Representatives passed the bill.

The Senate version particularly in clause 2, seem to have rendered the bill impotent.

Clause 2 of the Bill which deals with the right of access to records stipulates that, "Every citizen of the Federal Republic of Nigeria has a legally enforceable right to, and shall, on application be given access to any information or record under the control of a government or public institution or private companies performing public functions, provided the disclosure of such information or release of such record(s) shall not compromise national security."

Consequently, during the debate on the committee's report presented by Senate Committee Chairman on Information, Senator Ayogu Eze, senators harped on main issues on the bill, which had to do with what constituted national security in the course of asking for public records and who would define whether information sought breaches national security.

Senator Smart Adeyemi nonetheless went off mark and pointedly informed the members that the original document had been tampered with and as such an adulterated version was presented.

"This Bill will not meet with the concept of freedom of information that we want in Nigeria. What we have here is different from the one that was submitted.

“They have watered down the Bill so much that it cannot bite!

"If we bring the original Bill and place it side by side with what we have here, we'll see that it's different in concept and content," Senator Adeyemi stated.

Again, Senator Lee Meaba (PDP, Rivers), warned that unless section 39(3) of the constitution is amended, the FOI would not be operative.

Section 39((3) states; Nothing in this section shall invalidate any law that is reasonably justifiable in a democratic society -

(a) For the purpose of preventing the disclosure of information received in confidence, maintaining the authority and independence of courts or regulating telephony, wireless broadcasting, television or the exhibition of cinematograph films; or

The Deputy Senate President Ike Ekweremadu disclosed that passing the bill would amount to "surplusage" saying that the access to information is already enshrined in Section 39 of the Constitution.

According to him, "I'm aware that over 100 countries have this kind of Bill. Nigeria is one of the few countries with freedom of information in their Constitution. If it's in the Constitution, it would amount to surplusage.

"It's there in section 39 and those fighting for the FOI Bill never directed their minds to this provision of the Constitution.

"What we are doing here can't be more important than what is already in the Constitution. I suggest we go ahead to pass the Bill but it would amount to mere subterfuge surplusage. We can go ahead and pass to satisfy public curiosity."

The Senate President David Mark however agreed with Ekweremadu that indeed saying, what the chamber is doing by considering the FOI Bill is mere surplusage.

Also, he told senators that they cannot seat in the chamber to pontificate who would define what national security is all about when there is government in place.

However, the Senate could only work on two clauses in the Bill, before suspending debate to Wednesday.