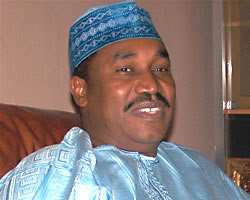 Governor Ibrahim Shema
Tragedy hit the ruling Peoples Democratic Party (PDP) presidential campaign train on Tuesday as the convoy of the Katsina State governor which was on its way to receive President Goodluck Jonathan at Daura town was involved in a multiple collision with two buses conveying some party supporters.

Although Governor Ibrahim Shema and his running mate, Abdullahi Garba Faskari, cheated death by the whiskers in the auto crash, no fewer than eight persons, including the governor's Aide-de-Camp (ADC), Mr. Aminu Ibrahim, died on the spot.

The crash reportedly occurred at Zaka Aliyan village, near Mashi, about 20 minutes from Katsina.

An eyewitness told Daily Sun that the ADC, who was traveling with his boss in the same car, three supporters of the PDP in a bus that collided head-on with Shema's Sport Utility Vehicle (SUV) and another four faithful of the party in another bus that crashed into the ill-fated vehicles all died on the spot.

The governor was going to Daura while the two buses conveying the PDP supporters were going towards Katsina town.

Investigations also revealed that about 20 others who escaped with various degrees of injury were rushed to the Federal Medical Centre, Katsina.

The remains of the ADC and three of the victims were also deposited in a morgue of the hospital.

Dependable sources close to the hospital, however, told Daily Sun that the remains of the ADC and the driver of one of the affected buses were removed from the centre before mid day for burial according to Islamic rites.

President Jonathan, however, arrived Katsina in the afternoon and was received by Governor Shema who accompanied him on a visit to the Emir of Katsina, Abdulmumini Kabir Usman, and the party elders at the PDP secretariat before proceeding to the Katsina Polo ground, to address the rally despite the tragedy.

Speaking at the low-key rally, President Jonathan told the crowd that he would tackle the nation's problems.

The governor was believed to have been slightly injured but he did not betray it at the rally.

The president, who said his campaign train was reflecting on the demise of former President Umar Yar'Adua on their way to Katsina when he learnt of the fatal crash involving Shema's convoy, assured that he would not disappoint the state and the nation.

He insisted that the robust plan, which the late Yar'Adua could not actualise would be completed by the current administration in the next four years.

Jonathan, who also commissioned a number of projects executed by the state governor, particularly hailed the three-lane ring road going round Katsina town as 'a major investment that has brought a major facelift to Katsina.'

He also paid courtesy call on the Yar'Adua's family in Katsina and promised that he would continue to work with the people of the state politically and otherwise.

Earlier, Governor Shema had assured that the party would deliver the state in the April elections, saying the electorate had seen in the PDP the prospects of sustaining people-oriented policies.

Meanwhile, the Edo State Governor, Adams Oshiomhole, has condoled with the Governor Shema.

'I wish to convey to Your Excellency the commiseration of the people and government of Edo State as well as my personal condolence over this unfortunate incident,' Oshiomhole said.

In his letter, the governor added: 'We share your deep anguish over the death of such a close and effective confidant and aide. I had met Aminu on a few occasions and do remember him as a charming and resourceful officer, who invested so much energy into his duties. Yet, we must bear the pain of his demise with equanimity, since we cannot question the will of Allah (SWT).

'Our fervent prayer is that Allah (SWT) will extend His mercy to Aminu and grant him Alijanna Firdaus, as befitting a favoured servant. We also pray God to give you and the family the strength and courage to bear the loss.'

While expressing his sympathy to the Katsina Governor, Oshiomhole said: 'We thank Allah for your survival and for the survival of others, who were involved in the accident with Your Excellency. We pray for the continued protection of Allah (SWT) as we all engage in the electioneering campaign.'