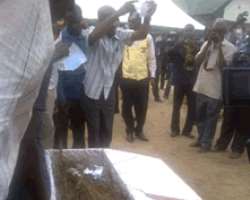 The boisterous and happy campaign suddenly turned solemn. The rally at Ibesikpo-Asutan Local Government was the second in the day penultimate friday for Governor Goodswill Obot Akpabio of Akwa Ibom State. It was strategic for some reasons. First, the state chairman of Peoples Democratic Party (PDP) prince Uwem Ita Etuk hails from there just as the immediate past governor Obong Victor Attah. Next, the former governor is alleged to be supporting the gubernatorial ambition of candidate of Action Congress of Nigeria (ACN) which was rumoured to have followers in that local council.

The solemn event at the Ibesikpo rally is thus significant. The state Deputy chairman of the PDP announced that the rally had turned solemn because a burial ceremony was on the verge of taking place. He urged everyone to rise and pay final respects to those who would be buried. Then he asked the pall bearers, about eight young men, to proceed with the coffin.

They went behind the podium to lift a coffin, which had been the cynosure of all eyes. The coffin lay there covered with clothes, boldly marked ACN. As thousands of attendants looked with rapt attention, Prince Uwem Etuk , party chairman, asked that the coffin be opened. Behold it was almost full of brooms. He told everyone holding brooms in the local council to place it in the coffin for final burial.

Several decampees from the 'about-to-be-buried' party came with their brooms and dropped it inside the coffin. Thus the chairman made a solemn pronouncement to the effect that the remains of Action Congress of Nigeria in the local council had been buried but regretted that the departed would not rest in peace but in pieces. The coffin was then removed from the venue for final burial.

Shortly after that incident, Governor Goodswill Akpabio mounted the rostrum and reminded the people that in 2003 as commissioner in the previous administration he traversed the 31 local governments in Akwa Ibom soliciting support for the second term of Obong Victor Attah, a son of Ibesikpo. He said the people owed him the same duty to ensure that just as he worked to return their son for another tenure, they should also work to bring him back to office.

'I have worked very hard during my first tenure to ensure even development of Akwa Ibom, which has manifested in many areas, over 400 roads, three flyover bridges, first in the history of the state, Ibom Airport, cottage hospitals, power plants and so on. You must therefore ensure that nobody comes with broom to sweep away the resources of the state and stop the development we are all enjoying. Do you want them to sweep away your money to Western Nigeria?' Akabio asked.

'Nooooo' chorused the people. He asked again and they chorused a louder negative answer.

He thanked them and assured that the burial ceremony marks the end of the party with the broom in the state.

Ealier Akpabio had addressed the royal fathers in the local council, where they prayed for him and assured him that he was their favourite for a second tenure. Akabio promised to redouble his effort in development in his second tenure revealing that he would shift attention to human development by way of partnering with the private sector to industrialise the state. He promised that no less than one industry would be sited in every local council in order to provide employment for the people and bring sustainable development. Akabio said he had embarked on vigorous infrastructural development in order to lay the foundation for industrialization. He said his second tenure would lay emphasis on industrialization in order to fully utilize the available infrastructure. He said he had achieved 86 per cent electrification, promising that in the first two years of his second tenure he would have put electricity in all parts of the state.