Help from Dangote for Samanja 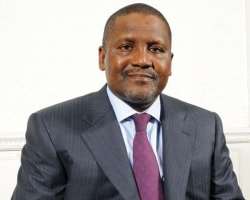 BUSINESS mogul and Chairman of Dangote Plc Alhaji Aliko Dangote has accepted to foot the medical bills of veteran actor Usman Baba Pategi (aka Samanja) who is suffering from glaucoma.

Pategi, a prince of Pategi in Niger State was popular for living the lead role of Samanja in the long rested national television series, Samanja.

The 68 years old actor has been suffering from the ailment for some time now and could hardly walk unassisted.

Alhaji Dangote acceptance to cover the N1.5 million bill required to carry out a surgery on the actor in India was announced by the Zonal Manager of the Federal Radio Corporation of Nigeria (FRCN), Kaduna, Alhaji Ladan Salihu.

The ailing Samanja expressed gratitude to the businessman and philanthropist. He also thanked a nongovernmental organization Arewa Zumunta Club based in the United States who also contributed towards the treatment.