IBB, NORTHERN ELDERS AND THE GAME WITH JONATHAN 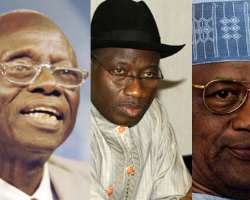 GIVEN his legendary capacity in the matters of stealthy statecraft, Gen. Ibrahim Babangida's recent assertion pooh-poohing talk of an agreement between him and President Goodluck Jonathan was an interesting intervention into the confusion surrounding ongoing talks between Northern elders and the President.

Ciroma, Jonathan and Babangida
Even though one of the four presidential aspirants in the consensus arrangement of the Northern Political Leaders Forum, NPLF, Babangida in the statement issued on his behalf by his media spokesman, Prince Kassim Afegbua was quick to put a separate mark of identity on himself.

While acknowledging talks between the NPLF and President Jonathan on the matter of reconciling their differences on the zoning of the Presidency in the Peoples Democratic Party, PDP, Babangida was quick to make a distinction between whatever agreement the NPLF would reach with the President and himself.

'There is a clear distinction between General Ibrahim Babangida as a private citizen and the Northern Political Leaders Forum led by Mallam Adamu Ciroma. This distinction must be properly understood each time the media try to draw its conclusions. It should also be noted that General IBB has access to Mr. President and can engage him anytime in the interest of the country,' the one time Military President asserted.

Given that Babangida alongside former Vice_President Atiku Abubakar, erstwhile National Security Adviser, Gen. Aliyu Gusau and Governor Bukola Saraki were tied in the consensus arrangement brokered by the NPLF the hint that he would opt out of a united agreement with President Jonathan was indeed discomforting to some.

If he departs, he would of course not be the first of the quartet to fall out of the group. Governor Saraki has not only distanced himself from the NPLF, he has gone far to embrace President Jonathan and was chief host at the President's campaign rally in Illorin, last Tuesday.

Suggestions of an independent walk by Babangida would not be surprising given the fact that the Director-General of his campaign organization, Dr. Raymond Dokpesi who made a public issue of his opposition to Jonathan had recently embraced the Jonathan campaign.

As Babangida admitted talks between the President and the NPLF had been going on for sometime. Sources close to both parties revealed that Chief Anthony Anenih, the erstwhile Chairman of the Board of Trustees of the PDP had been facilitating the talks. Anenih was in good position o facilitate the talks given his historical relationship with the prominent members of the NPLF and his equal allegiance to the President.

Last weekend President Jonathan crossed the bridge when he personally went to the Abuja residence of Mallam Ciroma in a face to face meeting with the NPLF. Besides Ciroma, other members of the group present were Atiku and Gusau. Babangida was reportedly absent because he was out of the country.

Jonathan was escorted to the meeting by Vice_President Nnamadi Sambo, Chief of Staff, Mike Oghiadomhe; Principal Secretary, Hassan Tukur; Acting Chairman of the PDP, Dr. Bello Halliru Mohammed; Anenih and a number of other aides and officials.

An NPLF source told Vanguard: 'We met at his request. We honoured him as the President. Our only condition was that he should meet us at the Chairman, Mallam Adamu Ciroma's house. He told us his request and we informed him that we will refer it to a larger body - the G15 and the NPLF.'

The NPLF was understood to have listed five issues including zoning and the matter of a single tenure as issues that must be addressed in the report. It was also learnt that other issues including the accommodation of the political interests of the NPLF members would be addressed by the President.

Atiku, Babangida and Gusau, it was learnt, would also make nominations into the Presidential Campaign Council of the President.

The meeting which lasted about two hours according to sources ended with the constitution of a seven man committee comprising three representatives from each side and a chairman nominated by the PDP.

The committee is supposed to articulate the issues and a framework for mutual cooperation by both sides. The committee in that regards is expected to address issues of concern to the Northern elders, principal of which are the matters of zoning and the President's commitment to serving a single term.

However, the committee's report which was to have been presented last Sunday as at press time was yet to be presented drawing apprehensions that the President may have resolved to backtrack from the talks.

Such fears are founded on the fact that some supporters of the President may be seeing Ciroma and his group as inconsequential forces.

Indeed, Governor Murtala Nyako a well known adversary of Atiku Abubakar said as much in an interaction with newsmen last Tuesday when he urged the later to support the President at this time for a quid pro quo in the future.

'Atiku stands a better chance to get the PDP Presidential ticket in the next political dispensation if he should unreservedly support the presidential ticket of Goodluck Jonathan and Namadi  Sambo as one good turn deserves another', Nyako stated.

Remarkably, the decision of the NPLF to open dialogue is believed in some quarters to be because the options of the northern elders is limited. Besides Jonathan the other options open to the NPLF are the other prominent northern presidential candidates, Muhammadu Buhari and Nuhu Ribadu.

Given the sort of revolutionary potential a Buhari or Ribadu presidency could inspire it is generally believed that the Northern leaders would prefer the devil they know in Jonathan than the Angel they do not know in Buhari and Ribadu.

While asserting that he was not about to dent his credentials on the altar of filthy lucre, Babangida in his statement last Tuesday was seemingly conciliatory towards  the President saying that even while maintaining his belief in zoning that he would nevertheless put the national interest foremost.

He as such concluded that he was yet open to dialogue with any of the major presidential candidates, to wit Jonathan, Buhari and Ribadu.

However, given Babangida's past engagements with the trio it is not surprising while many in the President's camp believe that the Northern elders are bluffing!