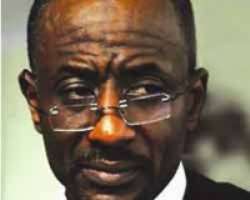 THOUGH Nigeria is determined to implement the policy on monetary union in the six West African countries through the adoption of a common currency, the Eco, in 2015, she will not do this to the detriment of the country's growth by pushing inflation to a single digit without economic fundamentals.

This is the position of the Central Bank of Nigerian (CBN) Governor, Mr. Sanusi Lamido Sanusi, who yesterday assumed the chairmanship of the West African Monetary Zone Committee (WAMZ).

The committee is meeting in Abuja to consider the report of the technical panel of the WAMZ, which met on Monday and Tuesday this week to review the compliance status of the converging six West African countries.

Nigeria, as at last year, met three of the four converging criteria and missed out on inflation criterion, which the WAMZ has fixed at single digit. The CBN governor yesterday put Nigeria's inflation figure at two digits of eleven per cent.

He then declared that measures have been employed to drive down the figure to a single digit through empirical methodology, just as he said Nigeria was well on course to meet convergence criteria with the economy recovering from crisis, size and structure of government spending being addressed and the pace of structural reform in power and agric sectors encouraging.

Sanusi said: 'Nigeria's inflation rate is 11 per cent but we are targeting single digit. It is not a source for alarm to us, but CBN is moderating it. CBN will not pursue single digit inflation at the risk of growth. Nigeria has provided strong leadership at WAMZ, Nigerian economy has strong impact on the WAMZ environment and will continue to live up to its responsibility.'

The objectives of the monetary union in the zone include maintenance of stable prices, sound public finances and monetary conditions and a stable balance of payments for member states.

The commencement of the union initially set for 2003 was extended three times, owing to the inability of member countries to attain the convergence level required for the introduction of the common currency. The Heads of State and Government of the WAMZ at its summit in Abuja on June 22, 2009 agreed to a new commencement date for the monetary union on or before January 1, 2015.

Sanusi yesterday attributed the inability of the converging countries to meet the criteria to the global financial crises. He said: 'The global economic recovery, which began mostly on account of impressive growth in emerging Asian economies, notably China, was stalled in the wake of the Euro zone debt crisis and the waning impact of the huge monetary and fiscal stimulus packages implemented by many countries. The global economy grew by 5.0 per cent in 2010 although at uneven pace. Recovery in many advanced economies was sluggish, but fairly strong in emerging and developing economies. Commodity prices were relatively stable in the international market during the period, while global trade improved slightly, indicating resumed demand for exports from developing countries.

'Consequently, the economic performance in WAMZ is strong with real GDP growth expected to average 7.2 per cent for 2010. Inflationary pressures generally eased due to stability in commodity prices and improvement in domestic food production, although fiscal sector performance worsened mainly as a result of shortfall in member countries' revenues. Gross external reserves generally declined and local currencies depreciated against the U.S. dollar.'

According to Sanusi, 'the resultant effect is that overall compliance with the macroeconomic convergence criteria deteriorated. Member states missed the criteria on single-digit inflation rate and fiscal deficit, excluding grants. Only Liberia met all four primary criteria, while The Gambia, Ghana and Nigeria met three primary criteria each. Sierra Leone met one criterion during the period.

'The WAMZ project, therefore, recorded some progress through the on-going upgrading of the payments systems, the accession of Liberia to the zone and progress in the integration of financial markets. There are still some challenges to be resolved with public finances, trade and financial sector development so as to be ready to launch the single currency and tap from the fruits of the union. It is critical to improve and sustain performance on the convergence scale through further strengthening of fiscal performance.'