OKEREKE-ONYIUKE AND THE P.H.D. SYNDROME 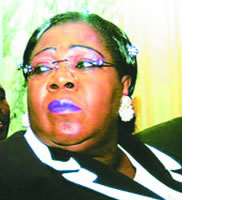 Okereke-Onyiuke
Since the recent stock market crash and the implosion at the top echelon of the Nigerian Stock Exchange (NSE), there has been a matrix of misinformation, misperception and misplaced aggression against the erstwhile Director -General/CEO of the NSE, Professor Ndi Okereke-Onyiuke, arising from an orchestrated political shenanigan by a cabal in a typical demonstration of the “P.H.D''(Pull Her Down ) syndrome.

As noted by Professor Chukwuma Soludo in a recent publication 'as every one holding public office knows, once you leave, there is often a tendency for your record to be rubbished and, if care is not taken, for you to be treated as a common criminal''.

Though the issue of her removal from office is a subject of litigation pending in the court, it must be noted that the capital market abhors high wire politicking and the exhibition of a cantankerous propensity because of its very sensitive nature and strategic importance in national economic development. As noted by a former President of the Chartered Institute of Bankers of Nigeria (CIBN) and Managing Director/CEO of Maxifund Securities Limited, Mazi Okechukwu C.K. Unegbu in a press interview in 2010, “the crisis in the petition that resulted in all these ought not to have arisen because the petitioner himself was part of The Exchange. The fact that he decided to blow hot because he was having issues with the management of The Exchange shows he was pursuing personal vendetta''

It is on record that the Nigerian stock market came to global reckoning during Okereke-Onyiuke's tenure, just as there was a heightened awareness among local investors as a result of her technical expertise and dynamism in propagating the ideals of the capital market. Under her leadership, the good times rolled as the stock market became the toast of investors who scooped great returns by way of capital gains and dividend accruals until the melt down occurred, and her vilification began.

For the purpose of keeping the record straight, the stock market melt down had nothing to do with the alleged actions or inactions of Professor Okereke-Onyiuke as bandied in some quarters. The market crash occurred in accordance with the nature of stock markets world wide. The Nigerian stock market crashed because of a massive out flow of local hot money which had earlier streamed into the market in the form of margin loans that were granted by banks to stock brokers. Hot money is short term funds usually held by speculators. It is volatile and the influx into the stock market creates the bubble with share prices shooting north ward, while its outflow creates pandemonium and the accompanying slide in share prices because of the supply glut.

The banks invaded the stock markets after the banking consolidation exercise. In capturing the scenario, the then Finance Minister, Shamsudeen Usman in his address to the Bank Directors Association quarterly meeting in 2008 was reported in BusinessDay newspaper of June 25, 2008 to have said that “the result of the banking consolidation is increased involvement of banks in stock market operation to generate increasing returns to shareholders'', adding “analysts insist that 18% or about N2.5 trillion of depositors, fund are used in margin trading acting as a factor driving prices in the stock market''.

Also in its publication titled Chronicles of 2008- The Nigerian Economy and Capital Market, Vetiva Equity Research noted that “there was a rumoured ban on margin trading by the CBN and SEC that they had given a clear directive to the banks via moral suasion to stop the extension of loans to stock broking for capital market trading. This led to a glut of sell orders by brokerage firms who had to repay their debt balances to the banks. This singular action was a major factor that facilitated the decline of the Nigerian Stock Exchange All Share Index (NSE ALSI) as margin facilities given by banks to stock brokers had funded significant volumes traded in the capital market''.

Though margin trading is a normal stock market practice, it must be noted that it is very risky as it has the potential to destabilize stock markets especially the mono-product types such as ours because it takes quite along time for mono-product markets to rebound upon destabilization due to the absence of alternative investment instruments where investors could migrate to. In the wake of the stock market crisis, Professor Okereke-Onyiuke intervened to arrest the continous slide in share prices though she met with little success because of the automation of the market and the absence of market makers who would have mopped up the glut in the market and stabilize share prices. Again, ironically she was criticized due to ignorance and a calculated attempt in some quarters to discredit her though she emphatically stood her ground.

In a Thisday newspaper publication of June 23, 2008, she was quoted as saying “there is no stock market in the world where managers would sit down and watch the market crash''. If we see something wrong going on in the market, we must intervene''. Her stand was corroborated by Robert Heller, The Federal Reserve Governor between 1986 and 1989 who was also quoted in the same publication concerning the 1987 US stock market crash to have said inter alia “without swift supportive action on behalf of the Fed, the stock market crisis could have been the straw that broke the back of the already weak Carmel''.

They are cyclical in nature, guided by the Random Walk theory, driven mainly by emotion just as they have their high and low periods and are also prone to crash in extreme cases depending on the interacting environmental variables. A few examples of stock market crashes around the world will suffice to establish the veracity of this truism. In 1982, the bubble burst in the Kuwait stock market because of the combined effect of the Iran Iraq war, a reduction in Kuwait government's spending and the issuance of US$95 million worth of un-backed post dated cheques by Kuwait investors. These developments combined to trigger off sell orders.

In 1987, the New York Stock Exchange crashed because of the publication of a trade deficit of US$15.7 Billion which exceeded investors' expectation. They were disappointed and this triggered massive dumping of shares such as was described as a cataclysm, with fist fights erupting in trading pits. The Dow-Jones Industrial average plummeted 508.3 points from 2246.7 to 1738.4 which translated to US$500bllion losses.

In 1997, the Hong Kong stock market crashed because of a web of problems in their local money market which got speculators to agitate and that triggered sell orders and a fall in the stock value which translated to a loss of about US$29.3 billion and created a ripple effect in other stock exchanges around the world.

The capital market is the axle on which the wheel of capitalism revolves. It is ruled by two factors which are constant in the market namely, greed and fear. While greed breeds the bubble, fear creates panic and dumping of shares which culminates in a crash.

There is a need for the regulatory authorities to intensify investor education in order to create a proper perception of the stock market. Because the Nigerian stock market had always been an example of a classic bull market, investors find it hard to accept the reality of the crash.

The bitter truth however is that stock markets do crash though its mechanism remains a fantastic source of wealth creation. A careful and focused investor with a defined investment objective and strategy can build an empire through the mechanism if the stock market. Ask Warren Buffet.

• Nnonyelu is a Lagos based capital market
specialist.