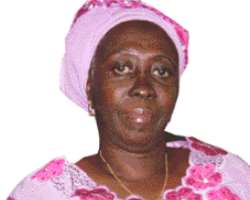 Chief Mrs. Iyamide Gafa is the President of the Association of National Accountants of Nigeria, (ANAN). Recently, she was in Bauchi State to inaugurate the newly elected executive of the Bauchi state branch. In this interview with our correspondent, she spoke about the on-going reforms in the capital market and how it has restored sanity in the system. She also spoke of the factors militating against the 2011 budget and steps the Federal Government can take to address them.

How would you give the overview?
It was well organized and we came out with the new executive that would be able to handle the affairs of the branch in the next two years, because the life-span of the executive is just two years. Looking at the caliber of the people who were elected, I believe they should be able to move the activities of the branch to greater heights.

Since Sanusi Lamido, the Governor of the Central Bank came on board, there have been a lot of reforms in the nation's banking industry, what is your take on this?

The budget for the 2011 has been presented to the National Assembly and we had some criticism, particularly from some politicians and there is no way the economy can advance without the contributions of the accounts, how would you appraise the budget for 2011?

In our own organization, we don't just make comments immediately pronouncements are made, because you find out that, you might at the end of the day; make some wrong conclusions or insinuations.

But I believe in a nutshell, that if the budget should be an intention of what the executive intends to do, that is, it proposes that if it makes this amount of revenue, it would do this expenditure. The expenditure depends on the revenue and now that we are talking about debit budgeting, we have to ensure that we are going to get the funds to cover the debits and for people to say that government has not put down certain incentives, I think it is not right.

It is the intention of government that if it makes enough revenue, it will make expenditures and if government on the other hand, has not made provision for adequate revenue and it is saying it must make certain expenditures, it is existing on a tight rope. That is why we find out in previous years, the government has not been able to meet up with the budget, because of these factors. But in 2011, we are still studying the pronouncements of government to come up with our own idea of what budget is all about.

With the reforms coming up in order to improve the nation's economy, what role is ANAN, playing in this aspect

We are a professional body in the field of accounting and accounting and finance is very vital to the well being of the economy. That is where the ethics of anybody who is working in that section is very important. Our aim is to ensure that those of our members who are working in the accounting and financial section abide to the ethics of the profession. What we are talking about here, is the reforms of following rules and regulations, keeping by it and to ensure that what the rules says, you abide by it. You are not asked to do anything that is unethical and when we see things happening that are not right, we call attention to it, by ensuring that the right thing is done, because it is the duty of the regulatory bodies in that sector.

There is a serious reform going on in the capital market and this has led to the exit of some top functionaries of that sector. What is your take on this?

We know what led to the reforms in the capital market, which was a global crisis and Nigeria is not an isolated economy. When the world economic crisis started, people who had invested their money became worried because of the crisis. That time, we were trying to convince them to invest in the capital market and then suddenly, panic started affecting the market.

We had a situation, where we found out that the rate in which stocks and shares were given out were varied. People all of a sudden felt they could go to the capital market, put in millions of money there and then in a month or two; they can redraw the money in hundred folds. But the reforms going on in the capital market would bring about sanity to the capital market. We have now seen the result of the over valuing of the shares and am sure with the reforms going on, it would try to avoid the type of over-evaluation of stocks and shares and we will make sure we keep its value.

What is your advice to the new exco of your association in Bauchi State?

The exco before them did a good job, so in like manner, the newly sworn in exco, should do exploits that would supersede what the former executives of the association did and they are to ensure that the association is one to be reckoned with in Bauchi state.