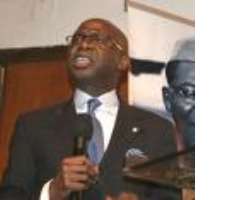 The presidential candidate of the Congress for Progressive Change (CPC), Gen Muhamadu Buhari has picked fiery preacher; Pastor Gbolahan Babatunde Bakare as his running mate for the 2011 presidential election as the deadline for nomination of candidates expires today.

The frontline runner for the highest political office in the land hinged his choice on the need to put the best feet forward in what promises to be a decisive political challenge for the soul of Nigeria.   "We have seen the uncommon enthusiasm of our people to register to vote in spite of the many challenges of the exercise, that speaks to their desire to do what Tunisians and Egyptians are doing on the streets through the ballot box in April.

There is a compelling need to give them a ticket that will make all their sacrifices worth the while and that is what we have done' he said.

General Buhari also condemns the wave of serial violence in Borno,Plateau and other parts of the country which have left casualties in it's trail and with the Federal Government appearing totally helpless.

"It is sad that these dastardly acts are taking place without any coordinated response from the government to guarantee the safety of lives and property.

A responsible leadership must not agonize over the virtual breakdown of security in parts of the country, it must organize the security system to deal with the situation first and create the atmosphere for social justice to flourish to end the conditions that make citizens to let loose against each other".

While condoling with the Borno State Government and people as well as all those who have lost loved ones in these pockets of violence, General Buhari sues for peace among all Nigerians and called on the government to sit up and bring an end to this palpable state of insecurity.

On the unfounded allegation by Jigawa State Governor, Alhaji Sule Lamido that his supporters are responsible for a hate text message circulating after the PDP primaries,Geneneral Buhari said it is regrettable that some people can't appreciate that certain offices require a high degree of responsibility in utterances.

"What evidence has he got to say that the text came from any of my supporters? Has he gone to the service providers and they told him the text originated from a phone traceable to anyone who is my supporter? I condemn any attempt to spread hate among Nigerians but I suspect this may be a mischief from our opponents who cannot face issues but dwell only on weeping up emotions.And it may appear that the governor may be aware of those behind this hatchet job"

General Buhari added that he has never been involved in the zoning debate because the Federal Republic of Nigeria with all the people within no matter how they talk to God is his constituency."Those who don't want the progress of our people have spent fortunes over the years to raise silly propaganda about me.I have been around for some years and vie challenged them to bring out one person I ever discriminated against based on faith but they are yet to take up the challenge. They should continue to tell lies about me just as I will continue to tell the truths about them" He insisted that the weapons that worked for them in the past will not produce this time around.

"We will force them to discuss issues. They must explain why poverty has increased from 45 per cent in 1999 to 76 percent in 2011 in spite of unprecedented revenue under the PDP Government. Nigerians want to know how we got to a situation where 98 per cent of our children now fail NECO examinations whereas we had 54 per cent pass in WAEC examinations in 1999.The Global Financial Integrity recently reported that an average of $15b left the shores of Nigeria in illicit transfers in the eight years it surveyed under PDP rule"