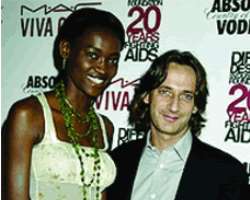 Oluchi & husband
Marriage is not very commonly seen in the priority list of many Nigeria's beauty queens. Where marriage is possible at all, they end up playing second fiddle. Most often than not, becoming visible spare parts for highly placed men in the society is their regular beats.

Saturday Sun captures the lives of some of them whose tags changed to MRS.

Helen Prest-Ajayi
Former beauty queen, Helen, is the CEO of Media Business Company Ltd. Helen is also the founder of mylifestylesolutions.com, a lifestyle portal set up to help people find solutions to personal issues through the medium of social networking. She studied Law at the University of Ife, and then went on to Kings College, London for her Ll.M. 'One never really stops practising law,' she replied, when asked whether she has abandoned the profession altogether.

She is married to to Tosin Ajayi and has three daughters, Tiffany,Tosan, and Tomisin. Helen doesn't believe anything in life should be regimented because it is God who is in control. She confesses that parenting is not easy and with each generation comes a new set of unique issues with no manual on how to cope with the changing culture.

Being a working mother is tough and sometimes it's difficult to juggle the work load as well as focus on the development of the children, she had said. She tailors her career to do the things she can within commitments because your children are only young once and you can't rewind if you miss their childhood. She gets home when when she needs to be.

Having been married once, Helen is not one of the women who rushed into marriage without being armed with adequate information about their spouses, and with unrealistic expectations. But she believes that one can not really be fully prepared for marriage because we can only have basic guidelines, as people only really show you their true selves after marriage. To her, marriage is very beautiful and it should be a partnership with unity and purpose. At the end of the day, if both parties communicate and understand each other, then marriage will be much easier.

Oluchi Oweagba-Orlandi
After years of strutting the runway in her modelling career that has blossomed beyond her imagination, Nigerian-born international model, Oluchi Onweagba-Orlandi started a new career, motherhood, on 25 April, when she was delivered of a baby boy for her husband, popular Italian fashion designer, Luca Orlandi. The super model revealed after giving birth to her baby that she was taken unawares when she realised that she was pregnant. Initially, she was not so pleased about it. It came as a real shock, but in her heart, she knew she had to get used to the idea. Oluchi preferred a a female child to the boy she had but her husband felt otherwise and was overjoyed when he learnt she was going to have a boy even though, he was aware she wanted a daughter.

Born on 1 August 1980, in Ayilara Street, Ojuelegba, in Surulere, a suburb in Lagos to a civil servant father, and a mother who is a nurse, Oluchi's journey to the world of modelling can be said to be the work of God, which is the meaning of her first name in Igbo dialect. While growing up, she was relatively less bothered about fashion and modelling. But with the support of her family and friends, she decided to compete in the inaugural edition of the Face of Africa in 1998. This was the first-ever continent-wide model competition, as opposed to a mere beauty pageant. The pageant was organised by the South African subscription television channel, M-Net, in collaboration with Elite Model Management. With her slim, tall (6 ft. 1 in.) figure, and her natural beauty, she captivated the judges, and easily won the competition. She was just 17 years old then.

In August 2005, she married her long time companion, popular Italian fashion designer, Luca Orlandi, to become one of the most famous Nigerians known internationally.

Nike Oshinowo-Soleye
Oshinowo was raised in Ibadan and England, where she attended boarding school. Although she had intended to become an air hostess, she studied Politics at the University of Essex. Shortly after obtaining her degree, Oshinowo, who was mentored by former Miss Nigeria Helen Prest-Davies, represented Rivers at the Most beautiful Girl in Nigeria pageant and emerged winner.

After her reign, which saw her compete at Miss World, Oshinowo featured in a commercial for Venus cosmetics and hosted a fashion and beauty show on Nigerian television. Her business ventures included an African restaurant and Skin Deep, a health and beauty spa which ran for seven years before it was sold after she decided to create her own range of beauty products for the Nigerian market. On January 17, 2010, she released the workout video Nike Oshinowo: Fit, Forty and Fabulous – the first celebrity fitness DVD produced in the country – and is currently working on the beauty products which will include fragrance, skincare, and haircare.

Now in her 40s, Oshinowo, who is fluent in five languages including Japanese and French, is hailed as a style icon in her homeland. Although she had stated in previous interviews that she had no plans to become a wife, Oshinowo is now married to medical doctor, Tunde Soleye. In 2009, the couple was in the news following a lawsuit instituted by Soleye's ex-wife Funmilayo, who claimed that he had been unfaithful with Oshinowo during their marriage.

Nike confesses to being deeply in love with her husband and she doesn't have to compare him with someone else. Since her whole life had been about herself alone, marriage was not particularly on her agenda because she finds it very challenging and never thought she would get married. It took her husband seven years to convince her to marry him, a story he proudly relives to his friends. Nike didn't give up her independence when she married Dr. Tunde Soleye, neither did she marry him for his money as people have speculated. She had said in a previous interview that she learns from her husband everyday, 'he is remarkable and ridiculously patient with me. He adores me and I love him right back. He's got a sort of grey hair I find incredibly attractive. He has a wicked sense of humour; he is very smart and clever and I love such people. He is not from my world at all; I couldn't marry someone from my world because it will just be chaotic.'

Bianca Onoh- Ojukwu
When a now-rested soft-sell publication first broke their romance story in 1992, hell was almost let loose. Then the story sounded so unbelievable. Worse still, the dramatis personae vehemently denied the relationship. One of the parties even threatened to sue the publication 'for carrying false rumour.' But before anyone knew what was happening, the couple, Emeka Odumegwu Ojukwu and former beauty Queen, Bianca Onoh tied the knots at a much celebrated society wedding, which remained the talk-of-the-town for many months.

When it happened, many were shell-shocked. And many questions came up. One, what could make an ex-beauty queen in her late 20's, from a privileged background and with practically the world at her feet decide to marry an ex-warlord old enough to be her father? But it seemed no one understood better than Bianca herself. In- spite of threats from her father, the late Chief C.C. Onoh to disown her if she went ahead to marry Ojukwu, the beautiful woman stood her ground and called everybody's bluff. It was obvious that she was (and still) in love with Ojukwu. In several interviews she granted, Bianca had described her husband 'as the best man in the world who understands my feelings and knows how to take care of a woman. Widely described as one of Nigeria's most admired couples, the story of Chief Emeka and Bianca Ojukwu's marriage is a classic case study of Bianca Odumegwu-Ojukwu (born Bianca Odinakachukwu Onoh) is a Nigerian businesswoman and former lawyer, best remembered for her controversial relationship with Chukwuemeka Odumegwu Ojukwu, the Ikemba of Nnewi and former Biafran leader, who was over 30 years her senior. Their romance was a national talking point in the early nineties

As a wife and mother, Bianca now divides her time between her home, her cosmetics busines, Bianca Blend in Enugu, and her interior decorating outfit, Nourobella.

Although, she had stated in interviews her disdain for modelling in the past, the former beauty queen has fronted an advertising campaign for her products. She is in charge of the non-governmental organisation, Hope House Trust, centred towards rehabilitating juvenile offenders in Enugu. The couple have children together. Of her marriage, she admits that while she is happy to have found her older husband, she would not encourage her daughter to marry the same way.

Weeks later, she got a call from him and they started talking. Although, nothing happened between them because she was still reigning, Sylvia and Emecheta would later meet again almost to the end of her reign when she travelled to the U.S.

She was still reigning then as most beautiful girl and nothing happened between them until after her tenure.

So, weeks later, I got a call from him and we started talking and that was it. And nothing else happened. He was based in the United States of America, we used to talk on the phone, anytime he is in town, we talk. I was also busy here with all the beauty competition I had to take part in. We met again almost to the end of my reign when I went to the U.S then, the chemistry of romance formally kicked off.

The couple have been together ever since and had been based in the US before they finally relocated to Nigeria last year. They got legally married in the US over a year ago and are blessed with a son, Drake.

Anita Uwagbele-Iseghohi
An only female child, Edo-born Uwagbale spent most of her early years in Lagos until she gained admission into Madonna University, Okija to study Accountancy. As an undergraduate, Uwagbale was crowned Most Beautiful Girl in Nigeria 2004, enabling her to take part in Miss Universe and Miss World later in the year. Although she was a contender for the crown, Uwagbale failed to make the top ten; however, she was named African Continental Queen of Beauty. As MBGN, Uwagbale's projects included activism against environmental pollution.

Uwagbale is married to businessman Tom Iseghohi. Following a registry ceremony in America, in 2008, the couple had a society wedding in Lagos, and are now the parents of two sons. In 2009, Isegholi was accused of embezzling from NITEL shareholders; the charges were later dropped. Uwagbale continues to study in America while working at her private businesses.

Adaeze Igwe
Adaeze Yobo was previously known as Adaeze Stephanie Chinenye Igwe. She is a former Most Beautiful Girl in Nigeria.

While she was an undergrad at the University of Abuja, Igwe pursued her childhood dream by representing Anambra in the pageant with 29 other girls.

During her reign, Igwe established her own charity, The Adaeze Igwe Foundation, an organisation which promotes AIDS and Breast Cancer awareness, and raises funds towards similar causes, including malaria and tuberclosis. Its mission is 'to create and increase access and opportunities to Nigerian youths and communities towards addressing [their] needs and challenges in relation to health and sustainable development.' She has since left the University of Abuja, and started a Communications course at the New York Film Academy.

In 2010, the former beauty queen married FenerbahÃe S.K. player, Joseph Yobo in a midnight ceremony held in Jos. The couple who dated briefly in 2009 before formally walking down the isle, are now parents of their first child.