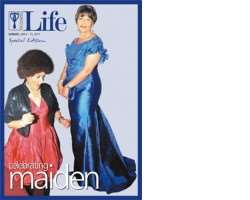 THE Chief Executive Officer (CEO) of Guardian Press Limited, Mrs. Maiden Ibru, GCOW, turned 60 on November 20, 2009. She did not celebrate the landmark then because her husband, Alex Ibru, was ill in London, U.K. (Mr. Ibru is the founder, Chairperson and Publisher of Guardian newspapers).

On Wednesday, December 29, 2010, a Thanksgiving Service, with Holy Communion, was held at Our Saviour's Anglican Church, Tafawa-Balewa Square (TBS), Lagos, because the Alex Ibrus had a lot to be thankful for, this time around. Mr. Ibru had recovered fully and his wife had become a year older. More than 10 Bishops, from around the country, led over 30 other clergy at the celebration of life service.

The well-liked and highly respected Mrs. Ibru was given “the full treatment” by the Church. The Primate of All Nigeria (Anglican Communion), The Most Reverend Nicholas Okoh, who was overseas on official duty, sent the above mentioned Bishops to represent him. The Bishop of Lagos Mainland, The Right Reverend (Professor) Adebayo Akinde, Ph.D, preached the sermon.

The Organist and Master of Music, Mr. Theophilus Okang  was assisted by Mrs. Nimi Akinkugbe, a part-time organist/pianist. Virtually every member of the Choir was in attendance. The popular Tenor, Stanley Okolie, sang a Solo and the church's Praise Band also performed.

MAIDEN IBRU was born in Sapele, in the then Western Region (now in Delta State), on Sunday, November 20, 1949, to Mr. Aristotelis Thomopulos and his wife, Hannah Thomopulos, nee Omaghomi, (who was affectionately called Sisi) … a great-great-grand-daughter of Olomu of Koko, the Governor-General of the area in the 1880s. Maiden's father and his brother, Sterious, were born in Neapolis, Kozanis, in the upper mountain region, near Thessasloniki, Greece, to Mr. Thomas Aristotelis and his wife, Zisoulis. The brothers, as young adults, migrated to the then Southern Protectorate of Nigeria. They settled in Sapele and set-up The Thomopulos Rubber Factory Limited. Later other factories were set-up in rubber-growing areas of the Protectorate. The brothers owned Real Estate in Lagos, Ondo town, Benin, and Sapele. Maiden's father died on May 15, 1957, at the British Colonial “European-only” Creek Hospital (now Military Hospital), South-West Ikoyi, Lagos.

Miss Maiden Thomopulos had her elementary education at the Children's Home School, Ibadan, and secondary education at Queen's School, Ede. Maiden went on to study at the University of Ibadan where she got a combined honours degree in English and Theatre studies. In 1972, she went to the United States of America for further studies. She holds an M.Sc. degree, in Communications, from the American University, Washington D.C. She has been married to Alex Ibru for 35 years and they are blessed with five children, Anita, Ose, Toke, Tive and Uvie.

On October 21, 2007, in Athens, President Karolos Papoulias honoured Mrs. Maiden Ibru with “The Golden Cross of the Order of Welfare (GCOW) of the Hellenic Republic … Greece.

After the Thanksgiving Service, a dinner dance (with a bias for the music and style of the 1960s) was held at the high-brow Federal Palace Hotel & Resort, Victoria Island. Many of the female guests wore Afro hairdos and mini-skirts from the “Swinging 60s”. The celebrity-barber, in those days, who popularized the Afro hairdo, in Nigeria, Sunmi Smart Cole, was at the party… this time, as a celebrity-photographer.  All forms of popular music was provided by key-board player/vocalist African Don Williams; and disc jockey Jossy Ladd. The Master of Ceremonies was Mr. Yinka Akinkugbe.

The birthday cake was made by Mrs. Funso Taiwo, nee Jibowu.  The premier mobile bar company, Maldesa Bar Services, did an exceptional job on the drinks with cocktails and cold drinks for the party. Exquisite food was provided by Astoria caterers.

Here are some of the personalities at the fabulous party.