JONATHAN AND THE OIL SECTOR 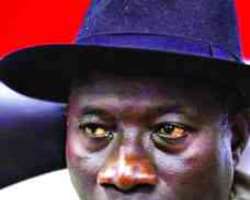 Jonathan
The year 2010 was remarkable for so many things, as far as the oil sector of the economy was concerned. One can assert with all confidence that this was the year that the effects of the Amnesty program became manifest. The Niger Delta Amnesty program was proclaimed in August 2009 by the late President Umaru Yar' Adua, and by the twilight of that year, we saw most of the kingpins of the militancy campaign buying into the program by surrendering their camps, arms and foot soldiers.

By the first half of the year 2010 the positive effects of the amnesty had become apparent in so many ways. We witnessed a revamp of crude oil production as we reclaimed our position as Africa's leading oil producer. A position which for some time had been threatened by Angola as a result of the collapse of our oil infrastructure caused by the massive sabotage of oil installations by the Niger Delta militants. This resuscitation resulted in increased inflow of earnings to the economy, with the concomitant effect of boosting the levels of critical projects execution at all levels of government.

The rehabilitation and reorientation aspects of the program are going on full steam at the Obubra Camp. So many of the repentant militants have passed through this program and have consequently gone on to participate in the Skills Acquisition components of the excercise. All these are geared towards making them useful citizens of Nigeria as they have been offered alternate and legitimate means of earning an income for themselves and their families, while contributing to the general progress of the country. This is already having salutary effects on national development while the issue of social miscreants and criminals masquerading as militants are gradually being addressed by the security agencies.

This year also witnessed the revamp of the refineries as, for once in over a decade, we witnessed the simultaneous and continuous operation of all the oil refineries. Before now, we were used to the refineries working in a fitful manner or being shut down for years while undergoing an indeterminable process of TAM;(turn around maintenance) which became a euphemism for looting and illegal transfer of our hard-earned foreign exchange to offshore accounts by unscrupulous members of the ruling class. The effects of the coming on stream of these refineries cannot be gainsaid as this has resulted in boosting the economy through creating jobs for persons and businesses that depend on these industries for sustenance. This has boosted the local economies of communities bordering these plants and has also reduced the quantity of finished petroleum products imported into the country, thus saving a major proportion of our hard-earned foreign reserves.

Also linked to this is the approval by the government within the year for the establishment of three Greenfield refineries around the country. By the time these and other private refineries, at various stages of construction, come on stream, the dream of self sufficiency in refined products will be well on the way to becoming a reality. This will also put us in good stead to add the much needed value to our oil exports as instead of exporting just crude we might also become a major exporter of refined products which will have a massive impact on our economy and foreign reserves through enhanced foreign exchange earnings.

The year also saw the coming on stream and the initiation of various projects in the gas segment of the industry. This has resulted in the continuous availability of cooking gas and the improved supply of gas to the power generating plants. The attainment of the much talked about stability and increase in generational capacity of our existing and pending power plants depends to a very large extent on the availability of gas which is the major driver of production in most of our power stations.

The emphasis, which the President Goodluck Jonathan's administration has placed on this sector, and the dexterity with which the Minister of Petroleum Resources, Mrs. Diezani Allison- Madueke, has been managing the affairs of this most strategic Ministry deserves commendation.

We have also witnessed the passage of the LOCAL CONTENT Bill into law and the subsequent establishment of the Nigerian Content Development and Monitoring Board (NCDMB) to oversee its implementation. This has put the country on the right footing for increased local participation in the oil industry. Henceforth, the era where all the material and human capacity needs of the industry were virtually sourced from overseas at very great costs is now over. This has opened the way for Nigerian companies and Nigerians to participate in all areas of the industry, thereby paving the way for rapid technological transfer and skills acquisition. With this policy in place and with the right commitment to its implementation, we will, in the very near future, witness the coming into being of a truly Nigerian oil industry.

Perhaps, the most visible achievement of the present administration is in the area of the elimination of fuel scarcity. At the beginning of last year, the most common sight all over the country was the meandering lines of vehicles waiting for fuel at every station across the country. It got to a point that sometimes it takes two days or more for a patient and persistent fuel hunter to be served at great personal costs and with the accompanying huge losses to the economy as a result of lost man hours and productive down time across various industrial, commercial and administrative establishments all over the country.

The only alternative for the impatient and those who can afford the exorbitant costs is to avail themselves of the services of the black marketers and their products of doubtful quality. Such patronage has had disastrous consequences on the engines of many vehicles, such that the owners have had to make huge unplanned financial outlays in order to fix their vehicles.

In fact, for over two decades sourcing fuel at the official outlets and at approved prices in certain parts of the country, especially in the East and the far North of the country was abnormal. The norm was to buy at the black market outlets and at highly inflated rates.

It is a miracle that today we are beginning to take fuel availability and at stipulated prices all over the country for granted. Most importantly, for the first time in a very long time fuel was available at filling stations throughout the country at official prices during the Xmas and New Year's festivities. What we are used to at such times is that all petroleum products become scarce and untold hardship is unleashed on the general public, especially those who have plans to travel during the holidays. As a result of this, the cost of transport fares and the cost of goods and services hit the roof because of the spin off effects of fuel scarcity.

Given this familiar scenario, it is pertinent to ask- what has changed between the previous years and now that has made it possible for this seemingly intractable problem to become a thing of the past? We think that the honest answer is the change in the helm of affairs, which brought about a change in the way the oil sector is managed. We must give kudos to where it is due and this is why we believe that President Goodluck Jonathan and the Minister for Petroleum Resources, Diezani Allison -Madueke, deserve our praises. They have shown by this concrete example that getting to grips with our seemingly intractable problems and proffering lasting solutions is not rocket science. They have shown that within us we have the necessary competence and capacity to transform this nation. All that is required is honest, dedicated and imaginative leadership.

Once a leader sets such high standards most of the followers will instinctively fall into step and will exhibit the same qualities. Those who cannot keep up with the pace will be like fish out of water and will automatically fall by the wayside. We have seen this replicated in the NNPC where professionalism is now on the ascendance as can be attested to by the fact that in the last year, for the first time, in many years we saw all the refineries in Port-Harcourt, Warri and Kaduna in operation.

All the above achievements are very heart warming and it has rekindled our belief and sense of pride in our ability and prospects as a nation. All Nigeria needs now to move to the next level in development is emphasis on the right leadership. The divisive politics of the past and the military interregnum of the past that were largely based on the narrow sentiments of tribe, regionalism and religion only succeeded in retarding our progress as a nation.

Good leadership engenders the economic wellbeing of all without discrimination, whilst bad and corrupt leadership also imposes poverty and hardship on all without discrimination. Nigerians, the time for a paradigm shift is now. This is the time to embrace the tried and tested values that determine the advancement of any society. This is the only way we can free ourselves from the unrelenting quagmire of mediocrity and retrogression.