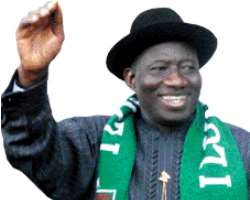 President Goodluck Jonathan
Senate President, David Mark appears to have incurred the wrath of his colleagues for failing to ensure that a good number of them clinched the Peoples Democratic Party (PDP) ticket to return to the National Assembly. The senators were angry that the Senate president did not get firm commitment from President Goodluck Jonathan on their securing return tickets to the National Assembly before leading them to support the president's ambition, which had cost them their seats.

In several states, a good number of the senators lost the game to aspirants backed in most cases by the respective state governors, who asserted their supremacy by clipping the wings of the National Assembly members.

The Senate leader, Senator Teslim Folarin is also in prison custody in Ibadan, with a murder charge hanging on his neck, a fallout of the bitter feud his faction of the Oyo state PDP had with Governor Adebayo Alao-Akala.

Some of the aggrieved senators have therefore vowed to vent their anger by withdrawing their support for the presidential aspiration of President Jonathan.

In this wise, some of the senators were believed to have sent a message to the president of the Senate to get prepared to come down from his high seat in the chamber to his allotted seat from June 2011 as the zoning arrangement would have to be reconfigured in line with political reality.

It was gathered that the senators from the North-west and North-central geo-political zones were angry at Senator Mark over his blind support for President Goodluck Jonathan who they noted betrayed most of them at the PDP primaries as he allegedly refused to protect their interest but instead supported the governors' interests.

It was also gathered that the defeat of some senators playing key roles in the Senate and who were closed to Senator Mark may have jolted him particularly as almost 40 per cent of them lost their return tickets owing to what some of them attributed to the manipulative tendencies of the governors.

Senator Mark who had on several occasions canvassed for automatic return ticket for senators was said to have been greatly embarrassed by the defeat of his perceived strong men at the PDP primaries.

Daily Sun reliably gathered that the defeat of some of the influential senators had so irked them to the point where they were now counting their losses in the agenda to get President Jonathan elected but who were now targeting to hit back at Senator Mark for not consciously moving to get firm commitment from President Jonathan before plunging them into a support game that had cost them their political fortunes.

The annoyance of the defeated Senators has therefore led them to push against Senator Mark's succession agenda even as the Senate president and his Deputy, Senator Ike Ekweremadu who was still battling to get his ticket were believed to have raised a crack team to drum support for their return to their current positions in the Senate in June.

As part of the plans of Senator Mark to return to his exalted position in June, he was alleged to have sealed a secret agreement with some senators to ensure that they retain their juicy standing committee positions in return for their votes to return him as president of the Senate.

However, a senator from the North-east geo-political zone on the platform of the ruling PDP told Daily Sun on condition of anonymity that most of the senators from the zone were already working with others to wrest power from Senator Mark in June when the seventh Senate would be inaugurated.

According to the senator; 'I can assure you that senators from the North-east have resolved to contest for the number three position in the event that President Jonathan emerges as the next president in May 29. Our zone has been left out of the power equation in the country for too long. The Senate presidency would surely be our turn like it happened in 1999.'

The North-east senators noted that even though the incumbent Deputy Speaker of the House of Representatives, Usman Nafada was from the zone, the people of the zone were tired of playing the second fiddle position.

Another senator from the North-central told Daily Sun that if President Jonathan eventually emerged as the next president, it was likely that a lot of political permutation would take place with regards to zoning of political offices amongst the six geo-political zones in the country.