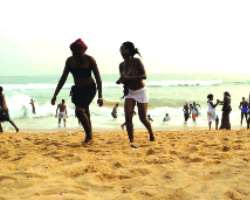 Having a jolly good time on the beach
I have a fixed idea of a pretty picture of a coconut paradise. It starts with a sun-soaked beach with a Caribbean character. The ocean rages and roils. Waves race and rise against the pebbled sands of the beach. Tall coconut trees formed a bewitching backdrop. The sun, a coppery ball, sink on the edge of the horizon where water and sky meet; a colorful contrast.

Badagry's coastal towns offer a refreshing retreat from Lagos' untamed chaos of man and machine. Mowo or Magbon, Ajido or Aradagun-anywhere along the Badagry axis, away from the polluted civilisation of the suburbia, is a good deal.

Going to Badagry was my idea of a quiet but interesting New Year's celebration. The trip this year did not fall short of my expectation, from beginning to end. The downside of journeying to Badagry used to be the vexing gridlock along the Iyana-Iba-LASU section of the expressway. The traffic jam could at times trap commuters for as long as three hours. This year, I was spared the travail and the tedium. The Lagos traffic of January 1 was grossly emaciated due to the yuletide exodus of Lagosians to their native homelands in the hinterland. Ergo, the journey to the Badagry town of Aradagun was hassle-free, concluded in a record time of 30 minutes at the speed of 120 Km per hour.

The big idea of going to Badagry is the beach. When I visited in the evening of January 2, the beach was under siege. A vehicle-lined expressway gave a foretaste of the chaos on the beach. Over a two-mile stretch of the beach was crawling with revelers. The beach was choked, and the crowd crushing. They danced and swam with amazing zest. As disheartening as the congestion was, it offered eyeful of other attractions. If the dancing orgy (a scenery reminiscent of the tail-end footage of Ricky Martins' La Bomba video) did not arrest your attention, then the live dramas of eccentricities and emotions would blip on your radar.

Opening act. A Yokozuna-size young man haggled with a gawky urchin over sales of boxer shorts, which the younger male was peddling at the rate of N100.

'Why?' Biggy wanted to know.
'Because you are 'extra-big.'' The boy pointed at his huge torso. And Biggy took offence. The poor boy scampered to safety. A swish pan to the left, and a boy-and-a-girl scene filled the frame. The girl was engrossed with a bowl of rice. The boy came wet from a swim. Still dripping with water, he sat beside her. She offered him the bowl. Instead of a few spoonfuls, he wolfed down everything in double-quick time. The girl did not hide her displeasure. 'But, I thought you gave me everything?' the boy protested. She broke down in tears. He spent the next few minutes begging her. Funny.

A little distance to the front, a man with a Hitlerian mustache wore a woman's swimming suit. He strutted about the beach. His gangling form in the absurd bathing suit was the butt of jokes. But he didn't care in the least.

A couple and their friend came into focus. After emptying a bottle of wine, the male in the pack strolled off, leaving the two females alone. Then he strayed away to sit beside a fair-complexioned, baby-faced bimbo. The women he left behind watched him keenly and they gossiped. One whispered to the other. 'Well, I am not perturbed, even if he likes he can disappear inside one of those huts with her, all I know is I am the one he would be going back home with.'

'You don't care about what he does behind your back?'

'Men will always be men, the important thing is for him to find his way home after his 'cheap' flings outside.'

'I can t live with that, o.'
The lothario came back and a melodrama ensued. The fiancÃ©e (who earlier claimed not to be the jealous type) flew into tantrums. 'What were you discussing with that lady?' They argued forth and back. They spat all types of profanities, including uncomplimentary F-words. The male walked away in exaggerated annoyance. 'But I thought you said you wouldn't be bothered?' her friend reminded her. Instead of an answer, she wiped tears from her eyes.

A little to the left, another couple sat, engrossed with the usual goings-on that often happen when boy meets girl and they both fancy each other. They played the romantic chess. The male tried to convince the female; the woman played hard to get. He muttered in her ears. She giggled. Te dijo te amo?

A coconut palm-inspired deja vu took me back in time to another beach experience on Gberefu Island in 2009. Gberefu is a tropical rainforest island covered with coconut trees, separated from the Badagry Peninsula by a lagoon, and populated by a pocket of natives. Its natural ecosystem is untainted by modernity, its strip of beach, very exclusive. Two years ago, we camped on the beach for a three-day retreat. After we were ferried across the lagoon by canoes, we fox-trotted through a verdant vegetation and villages, until we stood at the edge of the Atlantic, where the beach was clean, calm and vacant. Strips of golden sand stretched endlessly. No beach bums, no urchins. The natives went about their fishing activities without as much as pay us any attention. Our party was a complete set, with a DJ, a video cameraman and adequate provisions for mixed odds of 19 campers. We set up our dome tents on the beach facing the Atlantic Ocean.

First a big bonfire was kindled. Then a dancing revelry followed. We dined al fresco by the fireside. The next day began with a physical fitness drill. Afterwards, we played beach soccer and volleyball. Others chased crabs.

That morning, we relished the exotic taste of fresh coconut water. The tender coconut flesh, roasted in open fire (the scent was alluring), a fish kebab (made out of fish bought from the native fishermen as their canoes berthed on the beach) served as our between-meals snacks. Local berries, picked from thorny plants, served as dessert. The lemon-size berries, which tasted like a tomato and were endowed with the aroma of mangoes, were aboriginal to the island. Later, the group broke up. The splinters drifted apart in twos for a cosy 'two-aside'. In the evening, we had a proper football contest against the natives (a ritual they demand of us any time we visit the beach) and they got the better of us by two unreplied goals. The outing was a classic beach experience; one that we recreate from time to time. This year's retreat at Gberefu has been tentatively fixed for February 11.

Later as we departed the Badagry Beach at dusk, I was pricked by a pang of anxiety. Will this paradise still exist this time next year? There are reasons for my fears. The 10-lane super highway from Iganmu to the border town of Seme is racing rapidly and the next 12 months will see a lot of progress. This traffic spine will change Badagry. Once completed, it will put paid to the nuisance gridlock bedeviling the Badagry Expressway for good. Seme would be as far as a 30-minute drive from Iganmu, whether by bus or rail.

On the flip side, there will be a population shift from the over-congested metropolis to the swathe of land in the Badagry Peninsula. The ravage of urbanity will set in; pristine forests will disappear and concrete buildings will be erected in their place to meet man's rapacious shelter need. Also, Marlon Jackson's proposed $3.4bn Slave Resort and Lagos State government's Film City Project have been designated to be built in Badagry, particularly on Gberefu Island.

The reason I have a soft spot for a trip to the Badagry Peninsula? Peaceful solitude, fresh air, quasi-Eden tranquility, homes (hut or hovel) surrounded by palms and Palmettos, ferns and banana trees. The environment portrays an idyll defined by rural nature and nostalgia, a place where you can walk barefooted on beach-white sand. Indeed, the beach of Badagry is a model for Madonna's La Isla Bonita (The Beautiful Island)

'…tropical the island blew, all of nature wild and free…'

For the love of fresh coconut juice, I yearn to visit again.