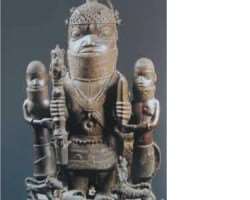 BUT in all the discussions on the abortive auction of the Queen-Mother Idia mask as well as in the restitution debates, one major actor is conspicuously absent or ignored by some participants, namely, the British Government. There is no doubt that the main responsibility for the invasion of Benin, the looting of the Benin Bronzes and the burning of Benin City lie with the British Government which planned, financed, organized and implemented the invasion. Indeed, the British Government has not sought to deny its responsibility; what it has tried to do directly or through interposed agents, is to offer justifications for the invasion and looting, none of which is convincing. The most absurd explanation for the looting and selling of the Benin Bronzes has been that the British needed to finance the costs of the invasion and to provide for widows and children of the notorious punitive expedition. One commits an outrageous crime and defends that action by the need to finance that action and to assist those carrying out the action for damages they may have received in carrying out the action.

The British Parliament has passed a law, Holocaust (Return of Cultural Objects)

Act 2009 that enables owners of Nazi looted artworks now in public British museums and galleries not only to obtain compensation for the loss but to receive the looted object. Some have wondered whether this act would not be sufficient for recovering the Benin bronzes… It is suggested that the loss of the Benin bronzes could be compared to loss due to Nazi actions. I do not want to enter into comparisons here for injustice is injustice and both situations show humankind at its lowest level. However, we should recall that in one case, the offenders were German official whereas in the second case, the perpetrators were British. A British government is not very likely to pass a law that would enable recovery actions in situations where the Government itself had planned and executed the notorious actions in question. But even more important, the act makes it very clear that it only applies to actions relating to Nazi seizures within a specific period. Article 3 of the Act defines Nazi era thus: 'Nazi era' means the period—(a) Beginning with 1 January 1933, and (b) Ending with 31 December 1945. '

Therefore the canons of judicial interpretation would not permit the extension of the Holocaust Act to looting by British soldiers in Benin in 1897.  Indeed, the fear of claims by Benin and by Greece was a point which had to be clarified during debates preceding the passing of the act. A different law would have to be made. We should caution over confidence in the judicial system helping to solve issues arising from the loot of 1897. The matter should be dealt with in other arenas.

An entity that was also conspicuously silent and absent in the discussions on the projected auction of the Queen-Mother Idia mask was the Nigerian Government. Most people, especially, young Nigerians, had sought in vain for indications of the policy of their government on this and related issues. Fortunately, a group of young Nigerians took the initiative to start actions that led to the eventual cancellation of the proposed auction. We have now received reports of statements by the Nigerian government.

According to reports to the Nigerian Tribune, 'the Federal Government is seeking diplomatic option to end the controversy surrounding the reported planned sale of the prized art objects.'(9)  The Tribune reports further that 'The source disclosed that President Jonathan had given instructions to the effect that no effort should be spared to get the Benin arts, as well as other such artefacts that symbolised the pride of Nigerians and their rich cultural heritage.

The president also ordered that machinery should be set in motion to get the artefacts repatriated into the country.

We have no detailed explanation about the 'diplomatic option' that the Nigerian Government is said to be seeking. However, if this is the same as the so-called 'quiet diplomacy' which Nigerian authorities have been pursuing in the last 50 years or so without any tangible results, then one may be sceptical. We would rather have an open and loud diplomacy in which the general public is well informed at every step about what is happening. We do not recommend an approach that keeps everything secret and when you inquire about progress you are told that diplomacy takes time or that one cannot, for diplomatic reasons, reveal anything. At the end one will be informed about the negative response based on one of the lame excuses in the arsenal of the British such as the Government cannot intervene in a matter of private law or that one should address oneself directly to the British Museum.

Nigerian authorities may wish to look at the position and methods of another African country which, unlike Nigeria, has been extremely successful in obtaining the return of its looted/stolen artefacts. Egypt, under the leadership of Zahi Hawass, has been able to secure the return of more than 5000 looted/stolen Egyptian artefacts from Western museum. The methods employed by Hawass are the opposite of 'quiet diplomacy'. He lets the general public know what Egypt wants and reports on his homepage the responses of the museum to his requests. He gets the Egyptian public and the world at large to see and realize what is going on. He treats public matters publicly and so there is no doubt who is doing or not doing what. The transparency often proclaimed but hardly practised is seen here at work.  Writing about the success of Peru in getting back thousands of its objects from the University of Yale in the USA, Hawass states 'One of the key components in my campaign to return stolen artifacts to Egypt is the media. I have been insistent on bringing this unacceptable behavior to light through press releases, print media and television appearances.'(10)

We are encouraged to read that 'The president also ordered that machinery should be set in motion to get the artefacts repatriated into the country.'

This new body should recommend sending a team from Nigeria to establish a list of looted/stolen Nigerian artefacts, including the Benin Bronzes, in Western museums. We have provided (Annex I) here a list of such institutions that could be used as a starting point. If the Government does not already have such a list. The experience of the Chinese government could be extremely useful.  The aim of the visit of Chinese museum experts to Western museums was 'to build a complete database of the Old Summer Palace's lost relics so we can have a clearer view of the historical royal garden…before it was looted and burned down in 1860 by invading British and French armies. We have clarified that this is an attempt to document rather than to seek a return of those relics, even though we do hope some previously unknown relics might surface and some might be returned to our country during our tracing effort.'

Maybe the Nigerian authorities are not aware that regarding the restitution of the Benin Bronzes and other Nigerian artefacts, there is great support for Nigeria in this matter. Apart from Museum officials and those who have built their careers on blood artefacts, most Westerners are in favour of the restitution of the bonzes. Many are of course not aware of the existence of these objects in their towns and countries but once properly briefed, they are shocked that their governments could tolerate such a scandalous situation that deprives Africans of their cultural artefacts which have no role in European culture. But this support and sympathy have to be cultivated, canalized and utilized effectively. This implies contact with the public in all these through the media, e.g. press releases, adverts and articles. We are yet to see a Nigerian diplomat or official presenting Nigeria's views and position on this matter in Western media. Could Nigerian embassies that have public relations and public information sections not assist in this matter? Above all, there should be a definite place in the internet where the public could look for information on Nigeria's policies.

The abortive auction of the Queen-Mother Idia mask offers opportunity to Nigeria to make up for lost time and opportunities. Following are a few points that come to my mind:

• Issue a detailed Government policy on this case and on restitution generally;

• Name one person or body that speaks for Nigeria on restitution and related matters;

• Request Nigerian diplomats to attend exhibitions on Nigerian culture and related matters that are held at their duty stations;

• Publish and publicize Nigeria's activities on restitution and related issues;

Nigeria, in alliance with Egypt, Ethiopia, Ghana, Greece, Italy, Peru as well as other States with interest in restitution matters must bring enough pressure on Western States so that it is finally accepted by all that stealing and looting the cultural property of others is against the fundamental principles of international co-operation as enshrined in the principles of the United Nations and UNESCO;

The moral principle and commandment that 'Thou shalt not steal' must be accepted as extending to all objects and property.

Nigeria must finally indicate to the rest of the world that it intends to preserve and keep its cultural artefacts for future generations who will not need to go to London, Paris, Berlin, New York, Chicago and other Western cities in order to see what their forefathers have achieved in this area. Nigeria has a lot to be proud of but unless serious measures are taken, to discourage plundering and to recover the looted objects future generations will have very little to see and will curse earlier generations.