Why I abandoned priesthood for for acting – Mbaka 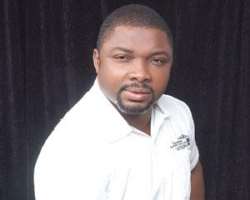 Ofiafuluagu Mbaka is the chairman, Actors Guild of Nigeria(AGN), Enugu State chapter. He is one of the few actors that doesn't disappoint the fans. Yet, he's also one of the most uncelebrated in Nollywood today.

Unknown to many, Mbaka was destined to be a Catholic priest. He started out from the seminary and bowed out, midway pitching his tent in the acting profession.

In this encounter, the bulky actor who recently got married to his girl friend, from Benin, relays his experience, while sojourning in the seminary, the problems confronting Nollywood and why he takes to acting as a career.

You have come a long way in the industry, what has been your strength?

Actually, I have come a long way as far as Nollywood is concerned. But it has not been easy with me. God has been my strength.

Enugu used to be the home of movie making in the recent past. Is the city the same thing today?

Let me correct one impression here. The issue of kidnapping never happened in Enugu. I'm not making this claim because I reside there. The fact that movie production moved away from Enugu to Asaba and Lagos, does not suggest it was because of the prevailing cases of kidnapping in that city.

Enugu State Government has shown serious commitment in creating enable environment for movie production in the state. Presently, you will start and finish your production in Enugu without any problem.

The city has bounced back to what it used to be in the recent past. I reside in Enugu, and I can assure you that all is well in that city in terms of movie production.

What's it like growing up in the coal city?

I'm just like every other child that grew up from the street; where you wake-up one morning and discover that you have no food to eat on that day. I faced similar situation while I was growing up in Enugu. That's why when I see people who are facing simliar situation today, I do not need any soothsayer to tell me what those people are passing through.

At what point, did you realise you have a passion for acting?

That was in 1994/95, when I was still an undergraduate at the Institute of Management Technology(IMT), Enugu. Then, somebody hinted me concerning the industry and for the fact that I have a passion for acting , I made every effort to actualise my dream. I have been in the background right from the time “Osofia in London' was shot in Enugu.

I started off from behind the camera. I wouldn't forget the role likes of Mr. Zulu Adigwe played in my acting career. He was the one who actually encouraged me and prepared me for what I'm doing today.

Even when I wanted to abandon acting, he was the same person that discouraged me never to do so. I knew about the industry while I was an undergraduate. As a child, I can't remember saying, I would want to become an actor. But when it has to do with entertainment, I had a strong passion for it . I started my acting career when I featured in “Igbudu” from the stable of Great Movies Productions.

That movie launched me into the mainstream acting world. But before then, I have been working behind the camera. The journey started from NTA, Enugu, where I did my industrial training as an undergraduate of Mass Communication. Thereafter I developed a strong passion for the tube. It's the passion I have for acting that has sustained me till date.

Did I hear you say, you wanted to abandon acting?

Yes, it was because of the issue of back-biting and misleading information. Then, there was no effective communication system as we have it today, which made it difficult for producers to contact any actor they wanted to feature in their productions. A situation, where a job that is meant for you is being hijacked by somebody else simply because you could not be reached or that,somebody blackmailed you to secure the job. I was angered by that situation, and decided to abandoned the profession.

What actually happened in your life that prepared you for acting as a career?

It has to do with my background. I actually attended a missionary school(Seminary), meaning that if priesthood was my vocation, I would have become a catholic priest by now.

For anybody who knows what the seminary school is all about, you wouldn't certainly claim that, priesthood is your vocation until the day you would be ordained. So, priesthood is not a profession for anyone to pursue, it's a vocation. If God has pre-destined you to be a priest, definitely you will become one.

However, I'm still proud that I never regretted going through the seminary. I wonder what would have become of my life today, if I was not there. The training I got from the seminary has been sustaining me .

That I was not a catholic priest today, is not because I was thrown out of the seminary. But it was as a result of my decision to discontinue the journey to priesthood. My contemporaries who are Reverend Fathers today can testify to this claim .

Would you say, the training you got while you were in the seminary in way defines the
kind of role you play in movies?

Not only in movies, it affects my whole life. The kind of roles I play in movies is accidental. But I try as much as I could not to be Ofia on set, rather to be that character I'm portraying in a movie. Thank God, over the years, I have not been that kind of stereotyped actor. I'm an all-round actor. And it has helped in building up my career.

The training I got from the seminary is still seeing me through, in everything I'm doing today.

You talked about wedding, did you marry recently?

Yes, I got married recently. My wife is from Benin. I met her, while she was a student at Enugu State University Science and Technology. I wedded her the same day Mike Ezuruonye walked down the aisle with his wife.

As the chairman of the Actors Guild of Nigeria, Enugu State chapter, what do you foresee as the challenges that confronted the industry in the last one year?

Until we learn how to work towards achieving a common goal, the industry will continue to witness insatiability and undergrowth in this new year. I must say that most of the problems we have been experiencing , especially in the actors' guild emanate from Lagos, which claims to be the centre of activities in the industry.

Other state chapters are peaceful, even though they have been suffering neglect on the part of the national officials of the body. The state chapters desire to be given attention, and carried along.I don't see this, happening in the guild.