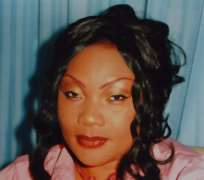 Despite her heavy make-up and semi-eccentric appearance sometimes, it may not be wrong to address screen goddess Eucharia Anunobi as an Evangelist as this short conversation with us; which almost turned into a church sermon of sort – with the actress making references to the Bible at every chance she got. Back from her marital mess, Eucharia has found her feet again, getting roles upon roles, attending important gigs in town and ready to mingle again. She has put her past behind her as she patiently seeks the right man to fall into the picture…

Nollywood seems to be taking a revolution with 'IJE', 'ANCHOR BABY' and some other movies that are rebranding Nollywood. In the movies you have participated in do you think they are worthy of rebranding Nigeria?

Yes Absolutely, I've always said that whether we like it or not the stories we tell in our movies since we actually started has always been our story in different forms; the stories of ritual, people who are non-conformist, kidnappers. So definitely, we're rebranding Nigeria but first of all, we cannot rebrand if we don't appraise the things that we have on ground and know we got a lot of dirt and to sweep it out we got to showcase them to tell people that this things are not good. So obviously, when we're done with this and people have come to realize them like all this internet fraud is not right, we start rebranding. When you want to start rebranding, you must give people thanks for them to have things to do. I've always given kudos to all the producers who have brought money to put up this industry but we need government to come in and now by the grace of God, I heard not too long ago that the President of this country has given out some money to the industry, now they're thinking. Whether we like it or not, everybody cannot be in the banking industry, everybody cannot be a doctor or an accountant. There are millions of people that the entertainment industry employ; the camera men, personal assistants, lighting men and editors. So tell me if this industry was not in place, where would we all be? It is better and high time that the government realizes that this industry is too big and would incorporate so many other people that rather would have been on the streets and cause havoc. For me, when you say you want to rebrand Nigeria, they should appraise the fact that they need to pump in money so that sucks in all the restless youths, and all of us as we're all gearing to go. We got talent so if you don't cap us and put us down in a place there's nothing we can do about it, they'll just be on the street looking for things to do.

Do you think President Jonathan will live up to his promise, based on the fact that previous promises have failed?

The thing about life is that faith is believing in the things you've not seen and hoping that they'll come to pass. So well we have faith and believe that he's promised and we'll pray. What we should do is pray that he puts those things into his sect because whether we like it or not, we have to realize there's spiritual power because the bible says 'We fight not against flesh and blood but against powers and principalities of darkness'. So whether you like it or not there are powers of principalities and darkness who are dream killers, so we want to say that this dream should not be killed by putting up our prayers, going down on our knees in our homes, offices and wherever we are that that which he has uttered will come to pass because sometimes when you utter your dream, the dream killers will kill it. There are evil forces and people who don't want this nation to go higher than this, maybe because they've already sold their soul to Satan and if you don't pray against them, they'll hinder the promises he has made

You have experienced all sort of controversial issues in the last few years, how do you live and cope with all that?

If you talk about the news concerning my divorce case, well because I'm a celebrity, they have to talk about it so I don't see the big deal about it as I'm not embarrassed about it and there's nothing to be embarrassed about. I'm not the first one to get divorced and I don't think I asked for a divorce so I want to believe that I was the best wife and best mother that any man can get; It's just that anyone could marry the wrong guy or girl. So maybe in my case I just married the wrong guy and I pray that very soon I'll get the right guy and all these things would come to an end because for me I'm straight.

So you're looking forward to another marital experience?

Absolutely because our God says we should not be alone.

So how soon is that?

As soon as the right man comes along. I don't want to get entangled with the one that'll bale off with my things again.