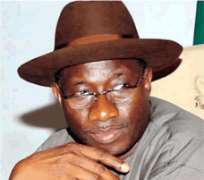 President Goodluck Jonathan
The Action Congress of Nigeria (ACN) has described as a pipe dream and an unnecessary dissipation of energy President Goodluck Jonathan's exhortation to his party, the Peoples Democratic Party (PDP), to win Lagos in the 2011 general elections. In a statement issued in Benin on Monday by its National Publicity Secretary, Alhaji Lai Mohammed, the party said the president should be focusing his energy on preventing Oyo and Ogun states from slipping away from the PDP, even though that in itself was an uphill task, instead of engaging in wishful thinking concerning Lagos.

''The PDP's hope of winning Lagos is best captured in the travails of a leper who, after managing to hold on to the few bean cakes he has just purchased, was asked to take some bonus cakes with him. Of course he replied that the benevolent seller should pray for him to even be able to take home the ones he had just purchased, instead of adding more.

''Mr. President, no one who has ever tasted the honey of good governance, that the ACN government in Lagos State and other states have been dishing out to the people, will opt for the bitter pill of bad governance that has been the lot of the PDP at all levels of governance.

''The good people of Lagos have said 'never again' to bad governance, and therefore will use their votes wisely in 2011 to slam the door against a possible PDP government in the state,'' it said.

Commenting on President Jonathan's ''mourning of the PDP's big losses in the South-west,'' ACN said it should be clear to the president that in over 10 years of democratic rule, the PDP had not been able to convince the people that it deserves their votes.

''Despite the PDP's resort to self help to 'capture' many states – especially in the South-west – during the last general elections, it should not have been a surprise to President Jonathan that those 'captured' states have now slipped away from the stranglehold of the PDP, thanks to the judiciary,'' the party said.

ACN said the hurricane 'progressive' that was sweeping across the South-west was not about to stop until it had swept off all the vestiges of purposeless governance from the region, and that not even a president's wishful thinking could stand in its way.

The party reminded President Jonathan that even his benefactor and the apostle of do-or-die politics did all in his power to 'capture' Lagos State in 2007, but was defeated by the power of the people.

''Since power belongs to the people, and the same people have vowed to protect their votes at all cost, the PDP and its leaders should not become starry-eyed about the prospect of winning Lagos in 2011,'' it said.

In a related development, the Lagos State chapter of the Action Congress of Nigeria (CAN) has advised President Jonathan not to allow himself, to be duped by political profiteers who had no electoral value by their so-called endorsements.

The party said the president would do better by steering Nigerian ship aright than gallivanting all over the place building fanciful political dreams that would never come to reality.

In a release in Lagos, signed by the Lagos State Publicity Secretary of the ACN, Joe Igbokwe, the party described Jonathan's wish for a PDP conquest of Lagos as a wild and hollow dream, which would never be realized in 'our lifetime.'

It said Jonathan was courting political doom in the South-west if he continued to romance unrealizable political dreams and advised the president to sit down and face the task on hand instead of the present revelling in the name of politicking.

'We are surprised that the president allowed himself to be cornered by the fast disappearing breed of vote robbers that have been recently rusticated from stolen mandates all over South-west and allowed them to sell him a worthless and unrealizable dream of conquering the South-west when it is obvious that the PDP is gone in the South-west and greatly endangered all over the country.'

It was obvious that the president and his South-west PDP brethrens are hoping on the same bizarre fraud that benefitted them in 2003 and 2007 but we want to assure them that they will have another thing coming in 2011. One would have expected a focused president to concentrate on the job of fixing the fast dilapidating structures in Nigeria and hope on that to give him approval among the people instead of gallivanting all over the place and getting political never do wells tickle his fancy and promised him heaven on earth.'

'We, at Lagos ACN and indeed majority of Nigerians know that the PDP for twelve years has been the single greatest bad news afflicting Nigeria and holding the country down in the comity of nations and which have eaten away the lives of Nigerians in these sad years. We know that Nigerians are united by the hatred they share for the PDP for taking us to this sorry state and that they are demanding stridently for a free and fair election in 2011 so as to free the PDP off the Nigerian power saddle. We know that in recent times, the PDP has suffered worse fates in the South West where it acquired power in 2003 and 2007 through electoral forgery and wanton fraud. We wonder what a president that wants Nigerians to take him serious will have with people who should be in jail for electoral robbery and how he will allow himself to be manipulated by these sets of remorseless perpetrators of electoral chicanery to dream of winning the South West in 2011. We wonder the premise for such mid day dreams if not the desperate desire to hear flattering words from political spent forces who have been made fugitives by the bestial acts they perpetrated to steal power in the South West.

'We are appalled that President Jonathan is busy romancing irreverent riggers for whatever political capital he hopes to curry from that but we want to let him know that Nigerians are decent enough to ostracize these people who have messed up the country's electoral system in the past twelve years for their selfish benefits. While we wish Jonathan and his South West PDP luck in their hallucination of using magical powers to arrest the catastrophic degeneration of their party in the South West, we want to warn them that Nigerians are wiser now and see the reasons for change in the hobbled state the PDP has brought on us these past twelve years. We assure him that his party is on its last lap and that nothing will save the PDP from the well expressed anger of Nigerians in 2011.

'Lagos ACN would not be drawn into trading words with anybody over the possibility or otherwise of PDP winning Lagos for that is a pipe dream that would never be realized in our time. We won't even be drawn into discussing the present withering fortune of the PDP in the South West because we know the party is as good as gone in the South West and other zones in Nigeria as it exists merely through electoral fraud. We assure Jonathan that his fate will be worse in 2011 if he continues romancing political fraudsters and never do wells, either in the South west or elsewhere. We believe he stands a better chance of demonstrating what he can do with power, not by gallivanting and uttering sweet nothings to political liabilities but improving the rickety state of Nigeria. We want to assure him that there is no short cut to power and if he is led into believing that there is at this very turn of Nigerian history, he has to expect the shock from Nigerians in 2011.'