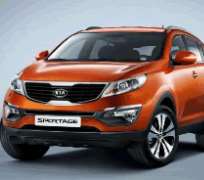 Kia Sportage
When Korean motor manufacturer, Kia, decided to branch out, the Sportage was one of the first vehicles to be launched in the global 'push'. Up until then, Kia had majored on domestic-based sales, building cars under licence from other car-makers.

A meagre start maybe, but it is this background that has formed a solid basis for the company to reach mainstream status. And, if anyone is in any doubt, the new Kia Sportage will soon change minds when it storms the showrooms in various parts of Nigeria .

You can't get more mainstream than a crossover, as it would seem that every car manufacturer has one. It is true that many of them are much of a muchness, however, the new Kia Sportage is one that stands out from the crowd, not because it carries any outrageous new technologies; it is simply an almost perfect package and very easy to live with.

Kia fans might not have expected to see the car quite so soon in Europe, Asia and the Americas as it was due to go on sale until last month, but because of the praise it received when it debuted at the Geneva Motor Show earlier in the year, it was decided that a limited special edition units could be brought into some markets ahead of schedule. Checks at Dana Motors showroom in Lagos, revealed that the new Sportage is not expected in the Nigerian market until a couple of months into 2011.

The special early edition models all have a 2.0-litre engine, with either a 6-speed manual or automatic gearbox.

The new Kia Sportage crossover is longer, lower and wider than its more SUV-orientated predecessor and has a much wide track, front and rear, which along with a slightly stretched wheelbase makes for more interior room. It also offers a larger canvass for Chief Design Officer, Peter Schreyer and his team, to come up with something to rival the Nissan Qashqai (as usual), the Peugeot 3008 the Ford Kuga and the Volkswagen Tiguan.

The first two are definitely the one's to beat and I would add the Mitsubishi ASX to that list. The Kia Sportage has has a very similar feel to the Mitsubishi ASX, but is much better looking. After all, according to a representative of the manufacturers, 'the aim was to make it an object of desire rather than simply a mode of transport'.

So what you will see when Dana Motors unveils the new Sportage is a sporty-looking exterior, with a far more muscular attitude to the old Kia Sportage, and even with a good deal of metal compared to the narrow windows, it appears sleek rather than overly macho.

As with the other newer Kias such as the Kia Venga and Kia Soul, the Kia Sportage bears the 'tiger nose', front grille with black louvres as nostrils. The straight, top edge marks the start of the broad clamshell bonnet with chamfered corners above the headlight clusters. These protrude slightly to emphasis the softer shape of the integrated bumper and also mark the start of the shoulderline that darts toward the wrap around taillights

The lower grille connects the fog-light housings with their chrome embellishments and oddly-shaped glazing, which has an almost Fresnel effect.

The extended wheelbase layout means that there is plenty of space inside the cabin of the vehicle. The three rear passengers are by no means cramped and despite the seemingly low roofline, there is a good amount of headroom. The Kia Sportage early edition features leather upholstery as standard and an added bonus is that the rear passengers have heated seats, too. The seats have the usual split fold function, which increases the generous 564-litres to a maximum of 1,353-litres, which is easily achieved. A cargo net, to go with the lashing hooks is also a standard feature of this very well equipped car.

The front seats are sporty and supportive, which adds to the relaxing drive. These too are heated and the driver's has lumbar support and height adjustment to go with the fully adjustable steering column and multifunctional steering wheel. Although the front of the cabin is clearly separated by the broad central tunnel, which houses the gear shift, it feels spacious. This is partly due to the simplicity of the tiered dashboard and the amount of elbowroom available.

The centre console of the Kia Sportage is on two levels, emphasising the swell of the fascia towards the middle. At the top, a red illuminated screen displays information about the audio system; an RDS Radio/CD Audio with MP3 compatibility, 6 speakers and USB & AUX Ports with an iPod cable. It also comprises Bluetooth with voice control and secondary controls on the steering wheel.

A rear reversing camera is standard and this displays the image in a section of the rear-view mirror, the same as the Kia Soul and Kia Venga. The second tier has a glossy black panel that houses the controls for the dual-zone climate control, which also cools the glovebox. Moving to the right, the neat instrument binnacle has smart black dials with easily-read, white numerals and bright red needles.

It is safe to say that the new Kia Sportage is fully loaded. Apart from the things already mentioned here are some of the other highlights: speed-variable and automatic wipers with a built-in de-icer, automatic lights, powered and heated door mirrors with LED indicator repeaters, cruise control ad an auto-dimming rear-view mirror.

Safety systems come in the form of, twin front airbags, side airbags at the front and full length curtain airbags with rollover sensors. There is also ABS with EBD, Electronic Stability Control (ESC) Hill-start Assist Control (HAC) and ISOFIX anchors and top tethers.

The Kia Sportage is a very well balanced and well behaved, remaining flat on fast bends and with the wide stance, there is a good combination of stability and agility. It is car that is just so easy to drive; even for people moving up from the Kia Picanto. All this and Kia's bumper-to-bumper warranty, can't be bad.