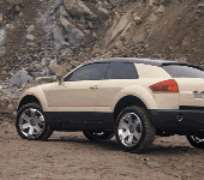 •Audi Q3
German car maker, Audi, has unveiled plans to capture the premium market in the next five years. To achieve this goal, the company is preparing 42 new models, including R5, Audi A6, Audi Q3 and Audi A0 for the premieres.

After Mercedes Benz announced last month that they intend to launch in the next four years no less  than 20 new models , Audi felt it wont be left out, and, therefore, the Ingolstadt automaker rushed to announce to the public that in the next five years, it would launch, no less than 42 premium models.

Audi's intentions are so clear: to achieve a number of 1.5 million units produced annually and installing the first position in the ranking of the largest premium automaker, deposing BMW. Of the 42 models only four of them will be representing, along with already announced A1 and A7, the key to a prosperous future.

Next year will mark the presence of S7 and the new generation A6, ready for Geneva. The absolute surprise will be the new off-road inclined Q3, the third family member.

Segment model E will take over many parts from his big brother A7, while Q3 will adopt a forward and a full traction. These two models will make an outstanding contribution in the sales equation, designed by Audi.

Alongside them, the Germans will bid on the future R5, the second series of e-throne concept, but that will not hasten to take the electrical power train. Unofficial sources speak of a central engine model, 5 cylinder, developed on a platform, that will also concern the brothers, Blue Sport Volkswagen and Porsche 356.

Audi puts great hopes in the future A0, already anticipated premium counterpart ofVolkswagen's E-Up. Version number of the smallest model in the Audi range will most likely be presented in 2012 and will be available only in electric version.

Contacted on the development, Josephine Nwosu of Audi Centre, the arm of Stallion Motors which markets the German brand in Nigeria, said it was heart-warming, assuring that the company would make available to the local market the cars as and when they are due. She said it was interesting that the good news was coming alongside the release of the brand's sales figure for US sales in September.

According to the figure, Audi sustained its 2010 momentum with record-setting. sales, which surpassed the prior September record set in 2007 by more than 100 vehicles. September 2010 sales of Audi cars and SUVs not only marked the sixth record month of 2010, but also represented the best third quarter ever in Audi U.S. sales history. The September results keep the German luxury automaker on track to set a vehicle sales record in the U.S. by year end.