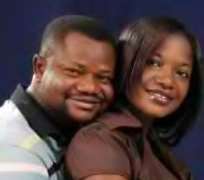 Celebrated Nollywood director and producer, Lancelot Oduwa Imasuen is one man you cannot help but admire his professional exploits. He got married to his lovely wife, Osas some three years ago, at the age of 36 years.

Lancelot said his initial dream was to get married at the age of 27. We engages the couple in a chat , where they take us through their matrimonial journey.
Hear them…

I married at the age of 36 years . But if you ask me what's my regret in life, I would tell you I have one or two regrets. Firstly, I wanted to pursue my academic programme to PhD level. But that never happened.

And secondly, I thought I would get married at the age of 27 years, because at age 26, I was already contemplating of settling down. But because of the extended family system that is peculiar with Africans, I couldn't actualise that dream. I have always envisaged a small but united immediate family for myself .

So, I wanted to see how much I could be of assistance to my extended family members before starting off my own nuclear family. For me, late marriage comes with it's own prices. I was into a relationship for seven years that did not work out. The ex-lover walked out of the relationship without any cause. It was so devastating for me at age of 29 years.

I never thought I could remain single beyond age 29 or 30 years. But it wasn't so. The important thing is not how far, rather it's how well .For three years now, I have been married with two kids. My wife is a treasure to me .Over the years, I have watched her perfect in the art of understanding the kind of man she got married to.

Each time she sees me , she's very happy and on my own part I try as much as possible to play my role as a husband to her.

Finding a wife in Nollywood!

There was no way I could have married an actress because I'm somebody that is greatly misunderstood. I cherished my wife so much because if she had listened to what my female colleagues told her about me, perhaps, I wouldn't have gotten married by now.

Indeed, it was after my marriage that I was confronted with how much some actresses wanted to discourage my wife from marrying me. One of them came to my house after our white wedding to apologise to me.

I didn't know she was my wife's friend. She visited us in our house, while my wife was in the kitchen she approached me to confess the negative things she told my wife about me that were not true. You know , when it's Lancelot, it's about professionalism .

The opposite sex would have admired more from a distance, but they thought I was too strict so to be called somebody's husband. I suffered that fate because of the industry. So any woman that creates time to be with me, could not understand that I'm a man that has taken time to create a dichotomy between my private life and my job. It was only very few of them who understood this fact.

My disposition in the job was to get to where I am today; to make a name for myself and the industry. So, my insistence on professionalism robbed me of the opportunity to belong as a man to woo a woman in the industry. Any woman I approach in the industry then would tactically avoid having anything to do with me.

But today time is proving all that wrong .I have been able to create that demarcation. When we are on location, all those ethics professionally must be observed I don't allow sentiment to come between my job and love life, because if I'm emotionally attached to you ,I wouldn't want to get you on the same production that I'm involved in .That's me, and a lot of ladies (actresses)did not understand my position.

In fact, when I was in getting married , they told my wife I'm married with kids ,because at the time I met my wife ,I have travelled to over 20 countries and during that period ,people thought I have a family of my own.

But they didn't realize that you must lay your bed the way you want to lie on it. That has been my guiding principles.

I didn't want to marry him – wife

Attraction His peculiarity . Lancelot is somebody that is very different from the way he looks. When I first met my husband, I had my impression about him. More so, a couple of other people had told me a lot of negative things about him. But despite that, I took my time to understudy him . Basically , he's a nice person, very down to earth .He does not like anything to bother him and he's a sincere person at heart.

How I met him

I met him at a bus station in Benin. I was on my way to Lagos,so also was he. I sat beside him, somehow, we got talking and in that process exchanged our mobile phone numbers. The rest is history.

Have I come across his name before meeting him in person

Yes, I think I was particularly interested in him and his works. This is because of where he comes from (Benin).In fact ,before I met my husband ,I wasn't a big fan of Nigerian movie industry .But whenever I see any movie directed by him I wanted to watch that movie, because I know it would be a good movie .Moreover ,my sister who used to be a very good fan of Nollywood movies encouraged me in watching movies directed by Lancelot. That's how I really got to know him and his works on screen.

My reaction at the bus station

Actually, I sighted him from a distance . I was not surprise because I have seen him a couple of times on television . I just said in my mind, oh! this is the Lancelot. Then, I walked pass him ,and acted as if nothing happened. Fortunately , I was privileged to sit beside him in the bus. I didn't allow the joy of sitting beside a superstar overwhelmed me.

Realizing I could be his wife in future

At first, I rejected to marry him. But much later I changed my mind and accepted him. What happened was that, at first ,I really didn't know much about his person. Again, because he was already a superstar , I had to seek advise from friends and well wishers, who tried to discourage me from marrying him.

Somehow I was confused ,but on a second thought, I said to myself, let me get to know more about this man that everybody is trying to castigate. And when I did, I discovered that he wasn't that kind of person ,a lot of people thought he was. When I found out he was much more different and a nice person ,I accepted his marriage proposal.

But even during our introduction ,some detractors told me he was married with kids, but I was not bothered.
What does it take to be Lancelot's wife?

It takes someone who is peaceful , kind and who will always there for him. Obviously someone talented and God fearing.

I complain ,that he's always busy and that he throws lots of things around in the house.

Most of the time he's out of the country ,when he's not around how do you feel his absence?
Earlier in the marriage ,it used to bother me a lot ,but with the passage of time, the understanding is getting better.

Sometimes , it can be lonely, but with the kids around coupled with working on my project, which is fashion designing I'm busy and less bothered. I don't feel it any more.