I CAN'T STAND THE SHAME, TAKE THIS BABY 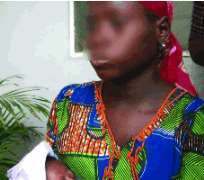 Victim and her baby
The 14-year -old girl in Lagos, Kehinde, who allegedly had a baby for her father, Yesiru Onojobi, is now in a dilemma over the custody of the baby.

The embattled girl told Daily Sun that she couldn't stand the shame of making the list of girls who had illicit affairs with their biological fathers which resulted in having abominable children. According to her, because of the stigma and sad memories associated with such baby, she has decided to donate her to the government.

'My father has ruined my life. He has brought shame to me, I feel like dying. I don't want to set my eyes on him anymore. I can't look at him in the face. I want the government to come and take this baby now,' she fumed as she wept.

The girl is also concerned about the health condition of her new born baby as some traditionalists in her community ( masquerade) have warned her not to breastfeed the baby, as doing so could result in her death and that of her child. According to her, donating the baby to the government would guarantee her safety. 'At least, they will feed her with nutritious food ,' she reasoned.

The Junior Secondary School I(JSS I) student narrated how her amorous father started sleeping with her since December 2009 which resulted in the pregnancy. Ironically, it was the father, who beat her black and blue over four years ago, when another man allegedly deflowered her. The father later converted her to his bedmate. 'My father gave me the beating of my life. Less than four years after, the same father forced and had sex with me. He had sex with me each time I finished menstruating. I warned him that it would result to pregnancy, but he didn't listen to me.'

He warned me not to tell anybody about the pregnancy, but one day, my cousins came, insisting to know the person responsible for the pregnancy. They tied my father's hands and legs with rope and took me to the backyard and I told them the truth. My father later took me to Safeway Hospital and ran away,' she said. But the 50 years old randy father, who owned up to the crime said he only had sex with his daughter once, adding that he was tempted to do so when she formed the habit of removing her clothes in his presence.

'She did not raise the alarm because it was not her first time of doing it,' he said. He, however, said he did not know what came over him to warrant his having love affairs with his own daughter. Meanwhile, the police have described the action of the suspect as an abomination. The state police Deputy Public Relations Officer, Mr. Samuel Jinadu, who briefed the press on the issue, described it as a clear case of defilement. He advised members of the public not to take the laws into their hands, assuring that the suspect would be arraigned soon.