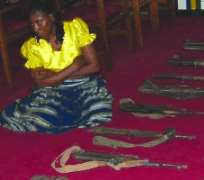 Dabar Masara, a small community in Kukawa Local Government Area of Borno State was a strategic centre for marketing of grains in the past. Although a rustic settlement, Dabar Masara presents a picture of a blossoming community as it regularly received visitors due to its closeness to neighbouring Chad and Cameroon. It is also a passage to other communities and settlements in the northern part of the state.

According to sources, residents of the community, who are mostly peasant and livestock farmers, lived peacefully until recently. Last Wednesday, they were jolted when the news of a woman caught with ten AK-47 rifles and nine rounds of ammunition filtered into the community.

Sunday Sun gathered that the woman, who gave her name as Mrs Lucy Danagana from Benue State, was intercepted by the police at the Dabar Masara village on her way to Doron Baga.

The 10 rifles and nine magazines were reportedly concealed in four bags of maize, with the 35-year-old woman believed to have ferried the illegal arms into the country from Mederina in the Republic of Chad through Kofia in Cameroon Republic.

Police sources claimed such shipment could only be possible through boats due to the nature of the area.

The Commissioner of Police, Mohammed Abubakar, who confirmed the arrest of the carrier of the 'evil grains' and subsequently paraded the suspect, disclosed that the attention of policemen in the area was drawn to the woman when a man alerted them that he suspected something was concealed in the four sacks. 'The man, according to report, maintained the bags were heavier than the normal grain bags,' he added. Abubakar said his men had to search the four sacks with metal detectors.

'As they conducted this exercise, the detector showed that metal was in the sacks and my men had to cut them open. They were baffled to discover ten AK-47 rifles and nine magazines concealed within the maize,' he explained.

The Police Commissioner alleged that the woman could be one of those providing arms and ammunitions to the Boko Haram sect, which is reportedly perpetrating serial killings in the state since early July.

Corroborating the CP claim, the command's spokesman, Lawal Abdullahi, an assistant superintendent of police, told our reporter on Thursday that the arrest of Danagana was part of the effort to rid the state of the illegal activities of religious fundamentalists terrorizing the state.

The PPRO said the command has spread its tentacles and was ready to 'deal decisively with any person or group of persons who want to cause unrest in the state irrespective of their status in the society.'

Borno has been under a siege since July following the serial killing of policemen, traditional and religious leaders as well as other persons. No fewer that 15 persons, including the national vice chairman of the All Nigeria Peoples Party (ANPP), Alhaji Awanna Ngala, have been killed in strange circumstances since the armed men took the otherwise Home of Peace and Hospitality by the jugular.

A few people including Islamic clerics, traditional rulers and politicians have either sustained injuries from attacks by the gunmen or escaped being mowed down just by sheer fate. Last Sunday, attempts by three armed men to kill the district head of Bolori, Alhaji Mohammed Mala, in Maiduguri metropolis at dusk was aborted by the combined effort of residents and soldiers around the area with one of the assailants arrested.

It was gathered that the three armed men suspected to be members of the Boko Haram sect had invaded the house of the district head at Gwange area about 9.30 pm on Sunday. But their attempt to shoot the traditional ruler was reportedly resisted by the people around and the man. Two of the assailants reportedly fled while one was apprehended.

Brigade Commander of the 21 Armored Brigade, Maiduguri, Brig. Gen Hassan Ndalima, who paraded the suspects, told journalists on Monday that the alleged assailant was one of the gunmen killing people in the state.

His words: 'When I received a call from the Shehu of Borno that gunmen had attacked the district head of Bolori, I personally went there. I learnt that the suspect who identified himself as Abdullahi attempted to shoot the traditional ruler. Interestingly, the district head punched him and that was how the AK 47 rifle he carried was seized from him and he was arrested.