Why I built a church –Obasanjo 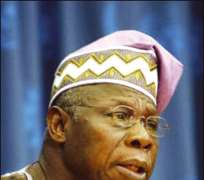 Former President Olusegun Obasanjo has explained that his decision to build a church was a fulfillment of his covenant with God while in prison in 1995. Obasanjo along with others were charged over a fathom coup during the administration of the late Sani Abacha and was subsequently imprisoned in Yola Prison. He regained freedom during the administration of General Abudulsalami Abubakar who granted him presidential pardon.

Obasanjo who spoke in Abeokuta, Ogun State capital during the dedication of a 1000 seater church, Chapel of Christ the Glorious King within the Olusegun Obasanjo Presidential Library (OOPL) told the gathering that while in the Yola Prison he met the leader of armed robbers in the northern part of the country called “Baba Ali'' who he said was the leader of the Arewa boys.

The chief promoter of the church with modern facilities and air-conditioner said before he was released from prison, he mooted the idea of building a church within the prison complex, if only he would be allowed by the authorities.
According to him, while in prison, he knew that he would come out alive, but did not know when and who would release him.

“But before I left prison, I said if and when I got out of prison, I would divide my time into four. I will buy a Land Rover and a Trailer and use them for evangelism. That was how I had thought I would live the rest of my life outside the prison. My evangelism on Land Rover, have not worked out as I had anticipated, because when I came out, the pressure started mounting on me to contest. I cursed those who were mounting pressure on me. Primate (Sunday) Mbang also joined them and I cursed him. As times went on, I saw the hands of God.

“When I got to Aso Villa, I tried to worship outside, but the security told me that each time I wanted to do so, they must cordon off the church and mount security around. When I challenged the security arrangement, they told me that things had changed in the 20 years that I left office. So the inconvenience of me going to church… I started worshipping in the Squash Court in Aso Villa.

“Of course, in Aso Villa, there were four mosques, but no single church, so it took me time to decide whether I would build a church within the Villa or not. Eventually, I decided-and a church was built-the National Christian Centre in Abuja. “When I was about to leave Abuja to come back home, I reminded myself about my pledge of a Land Rover and also remembered that these security boys would pester my life and would not allow me do what I want. So I thought of what to do and the idea of building a church came and this was how the church started,” he said.

Obasanjo who acknowledged financial and moral contributions of people and organizations including Mr. Femi Otedola and Mr. Jim Ovia told the gathering that he was merely a promoter of the church. “You can see I am only a promoter. This Chapel is not Obasanjo's church because some people say because of the church now; I am a G.O. (General Overseer). No o, Obasanjo is not a G.O. I am not a priest, Obasanjo is not a reverend gentleman. Obasanjo is not a bishop and this Chapel does not belong to Obasanjo. It belongs to the congregation that worships here,” he said amidst thunderous applause.

The National President of the Christian Association of Nigeria (CAN), Pastor Ayo Oritsajefor, in his sermon urged Nigerian leaders to have the fear of God while administering the country. “Sometimes we forget that history will judge us for doing what we ought to have done and what you have left undone,” he said.

He said he believed that the most important reason for dedicating the church was because “it symbolizes human building built by the hands of God,'' and lamented that people cried Lord, but they don't know God.
“I believe there are many things we can do as Christians in Nigerian to make the country a better place”, he concluded.