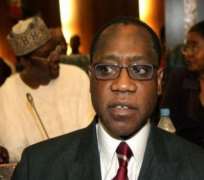 ABUJA, Oct 25, (THEWILL) - As the Federal Government tackles headlong its economic policies to stay afloat following the recent downgrade of the economy by international rating agency, Fitch, it said today it has set up three commercial courts to try economic offenders.

It also said it has set aside $1 billion USD for the take-off of the Sovereign Wealth Fund to check infrastructural deficits.

Speaking at the 51st Annual Conference of Nigeria Economic Society (NES) today in Abuja, Finance Minister, Olusegun Aganga said the fund has three components which include, inter-generational savings for the future, stabilization fund and infrastructure fund.

According to Aganga, the infrastructural fund will reduce the cost of food, production and invest in infrastructure as well as serve as catalyst for local and foreign investors.

He said the ongoing Power Sector Reform will achieve 40,000 mega watts of electricity by the year 2020 stressing that in the capital market, measures are being put in place to punish capital market offenders.

The Minster who looked disturbed over the low ranking of Nigeria, stated that government is taking the ranking seriously adding that following this, the government is organizing an Economic Summit next month.

In view of this development, Aganga said that the National Economic Management Team (NEMT) has been mandated to deliver on creating inclusive growth by creating jobs adding that the economy has no meaning if a large army of youths have no jobs.

Aganga said the NEMT has also been mandated to enhance productivity by removing and reducing the economic huddles saying that the Assets Management Company of Nigeria (AMCON) will be operational, the moment it is passed into law by the National Assembly.

Dr. Shamsuddeen Usman, National Planning Minister who was represented by Tunde Lawal said that concrete growth is achievable when policy summersaults are reduced and that for Nigeria to move to the next level, there is the need to design a development plan.